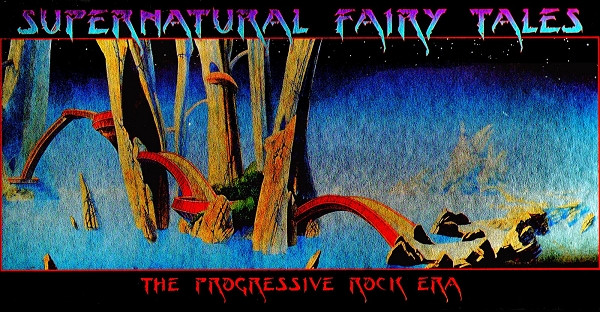 Who woulda thought... I mean, for a semi-major label to release this five disc celebration of Progressive Rock's early history and heyday is something that I would have given about the same chances of happening as the proverbial ice-water in hell. But Rhino has long been a label to look for successes in the fringe areas where the majors dare not tread. Consider their previous ten CD set The British Invasion detailing nearly every obscure Beatles and Stones wannabe band that existed from '64 to '69, and their Nuggets series that covered the mid-60s American pre-San Francisco era sound with equal diligence. And considering their parent company Atlantic is home to the back catalog of ELP, Genesis, and Yes, and Rhino themselves have issued most of Todd Rundgren and Utopia's back catalog, as well as working with Zappa, who better than Rhino to document this important period in the history of popular music — one that most major labels and critics alike would like to forget ever happened.

Once the idea for this project came about, Rhino enlisted Archie Patterson of Eurock notoriety (and an occasional contributor to Exposé‚ I might add) to co-produce the project. The idea behind the selection of tracks was to document the early trends and evolution in the late 60s with bands like Moody Blues, Pretty Things, Procol Harum, and The Yardbirds (the latter who could not be represented here due to licensing problems), basically pop groups who pushed the limits of the envelope in all directions. From there the set would continue through the earliest Progressive Rock, an on to its heyday in the early years of the 70s, and cutting off around '75 or '76 just before the major labels and the British and American music press pulled the plug on it.

From the outset, the concept was to have a British, and to a lesser degree European focus, so it's no accident that the only American artist represented on the set is the late Frank Zappa. It might also be noted that many of the better American 'prog' acts didn't blossom until the British scene was on its last breath. Perhaps that could be the subject of another box set in another place and time (maybe Rhino UK could release the American Progressive box set, he he). Given those two restrictions, this set is an excellent and fairly representative document of that entire scene, from its early roots through its glory days, in a more or less chronological sequence.

Disc one covers the late 60s proto-prog through around '70/'71, with the earliest track on the set being Procol Harum's "Repent Walpurgis" from late '67. Highlights of disc one include a twelve minute previously unreleased cut by Klaus Schulze, The Nice's original (banned in the USA) version of "America," and the eleven minute masterpiece "Kings & Queens" from the debut album by Renaissance. Disc two gets right into the meat and potatoes of the set, focusing primarily on the years 1970 and '71. Here we are introduced to some of the scene's major players: Van der Graaf Generator, Caravan, Curved Air, and Ememerson Lake & Palmer. From the continent comes Focus' original single version of "Hocus Pocus," briefly a number one hit on charts; also featured are contributions by Aphrodite's Child, Can, Finlands's Wigwam, and a previously unreleased seven minute cut by Ash Ra Tempel.

Volume three focuses on the years 1972 and '73, beginning with "Perpetual Change" by Yes, followed by the excellent (and yet to be issued on CD) "Lothlorien" by Argent. Strawbs, PFM, Roxy Music, and Savage Rose are all included here, as well as the set's first of two songs by Genesis, and ELP's "Karn Evil 9." Some may question the inclusion of ELO's "Roll over Beethoven," given that it was a massive hit by a band that is generally not considered "Progressive"; the same question could be asked about the inclusion of Golden Earring's "Radar Love" on disc five, yet both of these tracks seem to establish a vital connection with the mainstream rock of the day, which ensured (at the time, at least) Progressive Rock's commercial acceptance.

Drawing more from European bands than British, volume four introduces Amon Düül II, Nektar, Le Orme, Clearlight, Ange, and Lard Free, and encores by Yes, Genesis, Roxy Music, and the Strawbs, as well as the classic "Warrior" from Wishbone Ash's third album. Disc five concerns itself mainly with European bands from '75-76; at a time when the British music press began their all-out assault on Prog, it was still going strong on the mainland, moving into new and uncharted territory. Included here are numbers by Banco, Samla Mammas Manna, Faust, Magma, and Gong, as well as Canterbury diehards like Henry Cow, Quiet Sun, and Hatfield & The North. Closing the set is none other than Frank Zappa's "Inca Roads."

Originally planned to be seventy-five minutes each, numerous tracks could not be included due to licensing snags: Tangerine Dream, King Crimson, Camel, Pink Floyd, Soft Machine, and Mike Oldfield were all originally slated for inclusion in this set. Thus, most of the five discs end up clocking in at only a little over an hour. A mastering error that included the wrong Yes track ("And You and I" instead of "Siberian Khatru," as listed in the booklet) afflicted the earliest pressings, but has since been corrected.

The 64 page booklet includes several historical perspective pieces, as well as short pieces on each of the featured tracks, over fifty photos, and anecdotal essays by several band members (Gilbert Artman, Manu Gottsching, Klaus Schulze, Chris Karrer, and Peter Leopold — though it would have been nice to get some British perspectives as well). Top that all off with original artwork by none other than Roger Dean, and one has a package that genuinely represents the spirit of Progressive Rock in the 70s, and should once and for all paint a respectable face on that important page of music history. This is definitely a set worth owning.