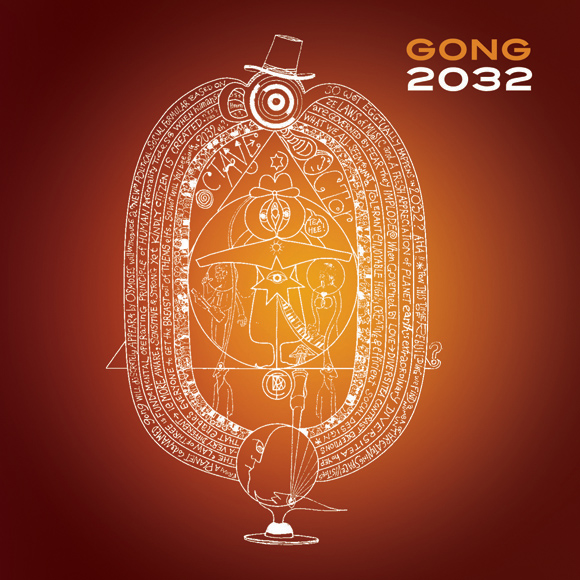 In 2032, or so the legend goes, Planet Gong finally makes contact with Earth. And I guess that you can consider 2032 to be the fourth part of the Radio Gnome trilogy. This new release is the first time since 1974 that the original group has recorded a new chapter. 2032 comes in a couple of formats, mine is a limited edition double LP set housed in a tri-fold sleeve with an LP sized 12-page booklet and large high quality full color poster plus a CD version of the album in a simple wallet. These aging pot-head pixies, some nearly geriatric, still continue to integrate new musical elements while remaining true to their roots. They rap during the “City of Self Fascination” and “How to Say Alive,” mix Celtic music on “Dance with the Pixies,” explore electronics and Gilli’s ethereal whispers on “Yoni Poem” and “Wave and a Particle,” Krautrock on “Guitar Zero,” acid folk on “The Gris Gris Girl,” and cosmic dance music on “Pinkle Ponkle.” And running throughout the mix is Daevid Allen’s signature glissando guitar. Joining Daevid and Gilli for this momentous occasion are Steve Hillage (guitar), Miquette Giraudy (synths), Mike Howlett (bass), Didier Malherbe (various reeds), and newcomers Chris Taylor (drums), Theo Travis (sax and flute), Elliet Mackrell (violin), Stephanie Petrik (backing vocals), and Yuji Katsui from Acid Mother Gong (electric violin). 2032 is quite an achievement and is sure to please existing Gong fans and attract new ones.