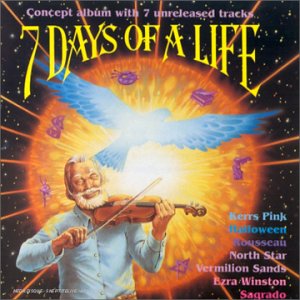 This compilation has obviously been real late in the making, as all of the tracks were recorded between 1989 and 1991. While the concept of this album is explained in greater detail in the CD booklet, it can be said here that Musea's aim was to pick seven groups, each one from a different country, to write a song for a different day of the week. Overall, the compilation is a mixed bag. There are a couple real stand out tracks on the CD and some really bad ones as well. Not all of the tracks are particularly indicative of a band's music, so are better taken individually.

Kerrs Pink "Monday (Man)" (10:40) This Norwegian band's sound definitely has changed from their debut album. The self-titled Kerrs Pink album released some time ago on Musea is certainly one of the label's best offerings, and those into Camel, Pink Floyd (mid 70s), and Wishbone Ash should definitely check it out. Over the years, though, the band's music has changed into a less distinctive symphonic music, that some say is comparable to the band Foxtrot (both bands share a member). There are some nice guitar flights on here, yet I miss the more overt Norwegian folk touches (they are less noticeable here) that grace their earlier music. Evidently these guys plan on releasing a third album.

Halloween "March" (9:30) Interesting pick for the French representative as I would have guessed that Edhels or Minimum Vital may have fit more comfortably here. Regardless, Halloween are definitely one of the most original neo-progressives with a gloomy atmosphere and a very Lovecraftian atmosphere (the track follows soon after they released Laz). It's very easy to pick out their music, as they definitely have a sound of their own. Halloween are still working on their third album (conceptual) Merlin which may be a double CD. Nice track.

Rousseau "Wednesday" (7:55) As this is certainly one of their longest tracks, I was looking forward to hearing it. I haven't been that impressed with much of Rousseau's music, as their strong Camel influences don't seem to fit well into a German context. This song is much more mature than anything from their first three albums, yet still seems to lack something. Despite the minor grievances, this will be one that many will like - a symphonic piece of subtle beauty. Regardless, Rousseau have broken up.

North Star "Thursday" (5:41) I have always had a difficulty listening to this many digital synths going at once, so this track immediately stood out as a detraction. The song structure is in the typical North Star style, and in the usual North Star fashion there is a really unpolished vocalist who mans the helm. While it does seem like there are some interesting ideas, the over-lyrical nature of the music and the arsenal of digital keyboards really swamps this one too much.

Vermilion Sands "The Love in the Cage" (6:58) Japan's tendency to head their symphonic bands with squeaky female vocalists is certainly their own. Bands like Teru's Symphonia, Pageant, and Providence may be difficult listening to those who cringe when they hear foreign lyrics, yet this band seems to strike the balance better. Vermilion Sands tend to sound different from the usual run-of-the-mill Japanese symphonics as they add a folky touch in the vein of Fairport. This track is nothing like the music on their Water Blue album, and is much more in the Genesis realms - in fact the guitar solo is almost note for note the one in "Fountain of Salmacis." Despite the lack of originality, its a very nice track, and one most should like.

Ezra Winston "Dark Angel Suite" (6:54) An excellent choice for the Italian representative, Ezra Winston's track from 1991 is simply awesome and by far the best track on the compilation. Following their incredible masterpiece Ancient Afternoons this is original symphonic progressive at its best, with a huge atmosphere, dreamy keyboards, and soaring guitar. This is an incredibly powerful piece, and indication (if they ever find time to record it) that their third album could be another classic.

Sagrado "The Central Sun of the Universe" (11:35) This is the only track on here that has been released before, as this ended up going on their third album Farol da Liberdade. I recently read a review of this album which says this is the best song on the album, but I seriously disagree. For eleven minutes, this tune really drags. It seems that pop oriented music like this succeeds better at a four minute level. Thankfully, this is the last song on the album, so you can turn it off after the Ezra Winston track. While the band has obvious talent, a more progressive direction would reveal it more.

Seven Days of a Life is a concept album of seven unreleased songs representing a different day of the week progressing from birth to death. The seven bands on this compilation are Kerrs Pink (Norway), Halloween (France), Rousseau (Germany), North Star (USA), Vermilion Sands (Japan), Ezra Winston (Italy), and Sagrado (Brazil). Musea first announced this album in the liner notes to their compilation Enchantement. Now four years later it is finally available. This CD is such an ambitious project that I think Musea made a final rush to release it. Unfortunately the usual high quality Musea CD booklet suffered. Sometimes there is missing text at the end of the band histories. A minor complaint since the music tells it all. Kerrs Pink opens the disk with "Monday Man" and the sounds of a baby crying. While not as good as their previous efforts, "Monday Man" is unique in that it is sung in English. Following Kerrs Pink on Tuesday is Halloween with one of the three outstanding songs on this disk, "March." "March" is dark and somber music using two H. P. Lovecraft poems as lyrics (first verse of "The House" and second verse of "Despair"). This song reminds me of King Crimson’s Red. Wednesday features Rousseau with "Wednesday," a light airy New Age/Jazz piece that could qualify for Lite Radio if not for the fact that it develops into ambient chamber rock music. Thursday introduces North Star, a band that excels at playing a blend of Genesis and ELP progressive rock when not stepping back for the vocalist. Fortunately on "Thursday" they replaced their usual vocalist Joe Newman with Ron Yanof. Ron’s voice is much better than Joe’s but the song has a dated feel and is not one of their best. On Friday Vermilion Sands arrives from Japan with the excellent "The Love in the Cage." This finely crafted folksy progressive treat is more delicate than Rousseau’s music and hints at Renaissance and Anthony Phillip’s The Geese and the Ghost. Saturday ushers in the "Dark Angel Suite" by Italy’s finest band of its generation, Ezra Winston. Ezra Winston filled this symphonic suite of four movements with lush melodies, lyrical instrumentation, and superb vocals. Closing out the week on Sunday is Sagrado’s "The Central Sun of the Universe." At 11:35 it is by far the longest and best song on the disk. This Brazilian band plays a symphonic rock that is so strong that I am tempted to call them the U2 of progressive rock. On the first listening their musical hooks grab you and you start to sing along with the band. Seven Days of a Life, like all compilations, is a mixed release, but the three excellent songs by Halloween, Ezra Winston, and Sagrado are alone worth the price.