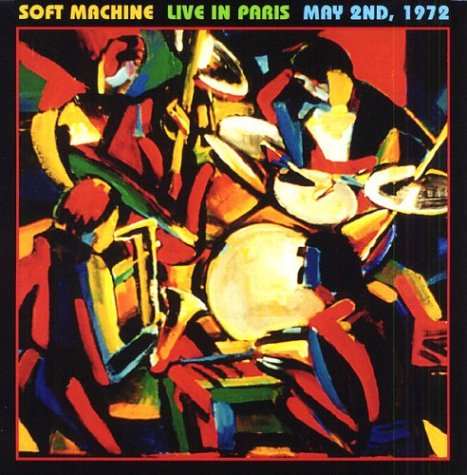 [This was written about the original One Way edition. - ed.]

Wow! Another newly found live recording which was previously available only in bootleg format? Unfortunately, the disc is a mono-sound recording which is frustrating if you’re expecting live stereo sound and a truer representation of the band's live sound. It doesn't appear to obscure the forceful performances by band members however. The lack of liner notes is also frustrating since no positive date is available for the gig as well as missing information on venue and city! This indicates less than the normal care given for CD archive releases. But Wayside lists the date as Elton Dean's last with the band from Paris in May 1972, which could be correct. The personnel line-up is the same as Soft Machine 5, side 2 with Dean/Hopper/Marshall/Ratledge, probably one of the more stable line-ups for this period. This was John Marshall's first tour replacing Robert Wyatt at the drumkit (daunting task indeed). The set material consists of three songs from Third; the remainder is from 5. Three songs are unfamiliar to me: "Plain Tiffs" (the intro piece preceding "All White"), "And Sevens," and "At Sixes." Ratledge's characteristic pieces spotlight his Lowrey organ style, although he seems to be much less aggressive for this concert than the Paradiso show from '69 (previously reviewed). Dean is clearly the main soloist during this phase of the band's career. Ratledge's role is primarily as a Fender Rhodes piano player with wah-wah. Overall a pretty good show by a band constant in transition.