The Seaprog festival in Seattle is scheduled for June 7-9 this year, and they've announced their lineup of performers. The revitalized Trettioåriga Kriget will cap Friday night, perennial favorites Marbin are on Saturday, and District 97 will finish off the fest on Sunday night. In support, they've booked a stellar variety of artists from the Northwest and around the world, including EchoTest, Markus Reuter and Trey Gunn, and the live debut of the amazing Troot project. 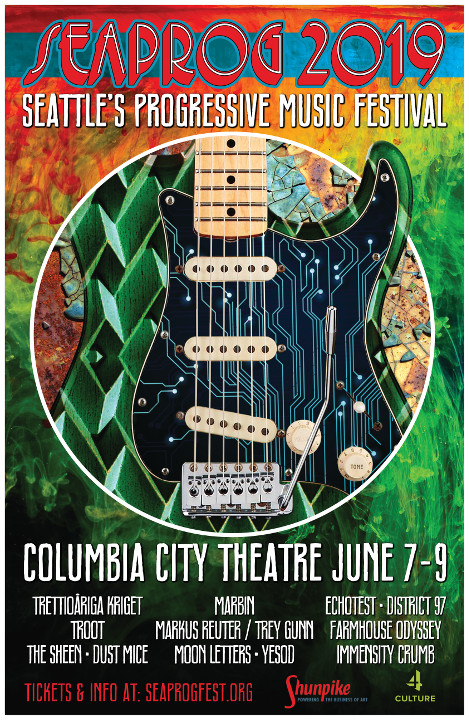 2019 will be the sixth edition of this small but growing festival, which has garnered rave reviews from performers and attendees alike. It's held in the historic Columbia City Theater in Seattle, and has a reputation for diverse musical offerings ranging from the avant to more conventional sounds. This time will be no different. Trettioåriga Kriget was one of Sweden's most prominent progressive bands back in the 70s, and the band's classic lineup is back together and performing material that spans their career.

Marbin should need no introduction around here — we've been covering them for years, and as one of the hardest working bands out there, they've built a reputation for great live shows. Likewise the musically hyperactive Markus Reuter, who's taking a break from Stick Men and other projects to perform in a duo setting with King Crimson alumnus Trey Gunn. The two will also be hosting clinics for tapping instruments in Seattle while they're in town.

Julie Slick and her compatriots in EchoTest will be doing double duty. In addition to their own set, they are all participating in the Troot collective performing the music of composer Tim Root, which we reviewed a while ago. This studio project has never performed in public, but most of the original musicians will be on board for this show.

Check out the festival's web site linked below for more details. Full-weekend passes are one sale now, and single-day tickets will be available later. The festival is a non-profit enterprise, and also accepts donations.