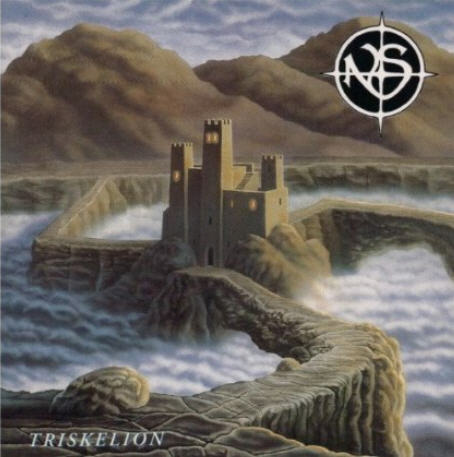 Sometimes I wonder what I am missing about a band or album Musea reissues. North Star is a case in point. They are a derivative neo-progressive band from Pennsylvania best described as a Genesis / Styx / Marillion hybrid. Triskelion is North Star’s first full length album, originally released on cassette in 1984, vinyl in 1988, and now on CD in 1993. Unfortunately, Triskelion is marred by songs of five minutes or less in length, a heavy emphasis on lyrics, and their annoying whiny nasal vocalist Joe Newman. At their worst, "Another Road of One" and "Time Traveller," North Star emulates the worst of all progressive bands: Styx. At their best, keyboardist Kevin Leonard and guitarist Dave Johnson cook, as on the sole instrumental "Herman Muenster." North Star should have focused on being an instrumental band and they may have garnered some recognition for Leonard’s Emerson-influenced keyboard chops. Newman’s voice and the lyrics simply destroy any listening enjoyment. It is a shame that Musea went to such lengths with this reissue: new Jon Alderfer cover art (also reproduced in shades of blue on the CD), three bonus tracks, band history, and lyrics. If you feel compelled to buy a North Star release avoid Triskelion and buy their second album Feel the Cold or any of Kevin Leonard’s solo releases. Triskelion may only be of interest to North Star completists and therefore puzzles me why Musea reissued it.

Zapotec - Alpha Centuri – When I first listened to this disc, I quickly categorized it as jamming space rock. The first track builds from quiet ambience to a throbbing jazzy thrash, consisting almost entirely of an...  (1999) » Read more