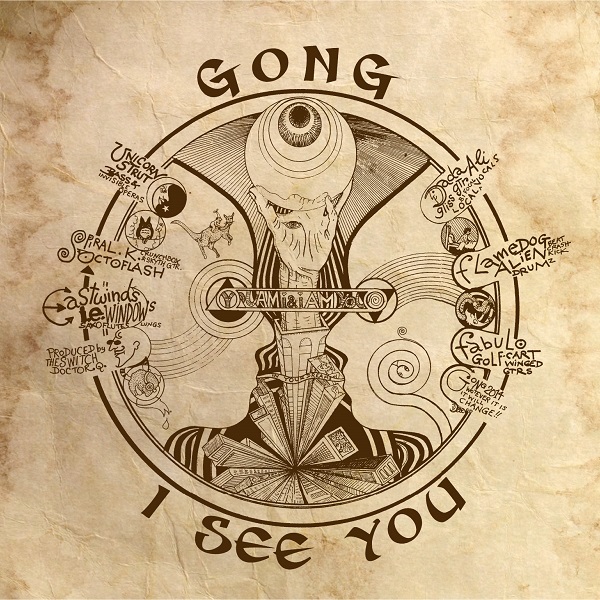 The two geriatric pothead pixies Daevid Allen (age 76) and Gilli Smyth (81) are still going strong even though Daevid had some recent health issues. As it has been five years since the last Gong studio release 2032, I was looking forward to their new album with anticipation, but there is a definite shift in the music. I See You is not a continuing chapter in the Gong Mythos. This is a very uneven release. About half of the songs are bland, leaving me with a so-so impression: “I See You,” “Occupy,” “When God Shakes Hands with the Devil,” “Syllabub,” “You See Me,” and “This Revolution.” The whimsical spark of the earlier Gong is just missing. Although on “Syllabub” Daevid’s glissando guitar ends the song on a high note, rescuing an otherwise mediocre tune. “This Revolution” is an uninspired pseudo-political rant that seems very out of place, even with the tasteful sax accompaniment. Once you get beyond these tunes, there are many excellent songs that save the album and extend the Gong legacy: “The Eternal Wheel Spins,” “Zion My T-Shirt,” “Pixielation,” “Thank You,” and the album closer “Shakti Yoni and Dingo Virgin.” Gong is truly a family affair as Daevid and Gilli’s son Orlando Allen (aka Flamedog Alien) plays drums. And the band continues to use other pseudonyms: Unicorn Strut (Dave Sturt, bass and samples), Spiral K. Octoflash (The Cardiacs’ guitarist Kavus Torabi), Fabuloso Golfcart (Fabio Golfetti, guitar), Eastwinds (Ian East, sax and flute) and Dada Ali (Daevid Allen). I See You is not an album for the uninitiated listener, and it may not appeal to the Gong devotee either. And given both Daevid’s and Gilli’s ages, I See You could very well be their swan song. Perhaps it is time for them to hang up their guitars and costumes and enjoy their remaining years in relaxation.