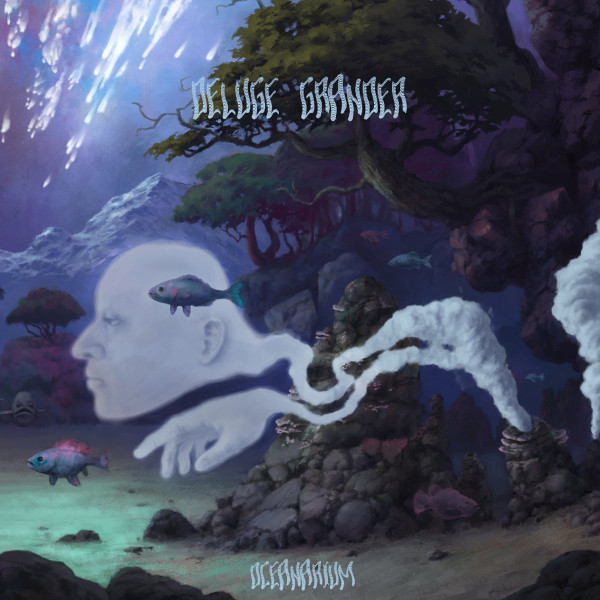 I know there are a lot of people who listen almost exclusively to vocal music. Songs with lyrics make up the vast majority of most people’s listening. So why is it that the majority of my favorite music is instrumental? One reason is probably that as a critical listener, vocals are just one more thing that can get screwed up. If a mediocre keyboard player sits at a Hammond organ and plays a simple melody or chords that fit the rest of the music, it’s going to sound just fine, but if a mediocre singer opens their mouth, everything can be ruined. Things are maybe a little trickier with other instruments, where tone is the result of technique rather than just setting controls, but I think the point holds. And then there’s the lyrics. A decent piece of music can be ruined by bad lyrics, and there are a lot of bad (or just dumb) lyrics out there. Which brings us to Oceanarium, not because it’s got bad singing or stupid lyrics, but because it’s a maximum-length CD chock full of good instrumental music. (Just as a disclaimer, I’ll note that other Deluge Grander albums have featured singing without damaging their quality.) Multi-instrumentalist and composer Dan Britton and bassist / guitarist Brett d’Anon are the only musicians to appear on all tracks, with numerous guests fleshing out the music with a wide variety of brass, woodwinds, and strings. Some of the tracks rock, particularly “A Numbered Rat, a High Ledge, and a Maze of Horizons,” which starts off the album in an energetic fashion with a great guitar riff. Over its 11 minute duration, it covers a lot of ground, with nice touches from oboe, bass clarinet, and trombone in addition to organ, Mellotron, and other keyboards. I’m not going to try to explain why Oceanarium succeeds where so many symphonic wanna-bes fail — there are too many factors involved, and it just comes down to the fact that good decisions were made, and executed really well. This one’s a winner, and fairly bursts with originality and nice touches.

Deluge Grander is no stranger to Exposé and our readers, but their fourth album, Oceanarium, is my first exposure to the band. Oceanarium is the second in a planned three-level seven-album series, the first, Heliotians, was released in 2014 and the third album, Lunarians, scheduled for 2018. Unlike Deluge Grander’s earlier albums, Oceanarium is a set of eight progressive symphonic rock instrumentals. Deluge Grander is the brainchild of multi-instrumentalist Dan Britton, joined by a cast of supporting guest musicians on various tracks: Dave Berggren (electric guitar), Neil Brown (trumpet), Steve Chruchill (oboe), Brett d’Anon (bass, guitars), Brian Falkowshi (saxophone, flute, clarinet), Denis Malloy (bass clarinet), Corey Sansolo (trombone), Natalie Spehar (cello), and Zach Stachowski (violin). Oceanarium is a concept album that follows a loose thread about a rat-man who falls off a building into an area of competing tribes, which he leaves, only to get lost. The album opens with “A Numbered Rat, a High Ledge, and a Maze of Horizons.” The track is a rotating composition with the lead line moving from organ to harmonica to electric guitar to piano to clarinet and back to the beginning for complex symphonic / classical progressive music with some tasty Mellotron near the end. The next track, “Drifting Inner Skyline Space,” starts out calm with some analog synths, slowly adding some jazz fusion elements and violin with similarities to Mike Oldfield’s compositional style. “The Blunt Sun and the Hardened Moon” is next and shows more of a King Crimson influence with its complexity, as well as a reference to Steve Hackett. The dark, eerie “Finding a Valley in a Gray Area on a Map” follows and incorporates some Asian motifs. The mood shifts with “Finding a Shipwreck in a Valley in an Ocean” and its swirling piano runs alternating with progressive jazz fusion, and tying it back to the previous track, some Asian motifs. Track six, “Tropical Detective Squadron,” is an eerie track with sliding notes, shifting moods, Mellotron, and lots of little interesting things peppered throughout. “Marooned and Torn Asunder” is a bridge between “Saruned” from Heliotians and “Torn Amoonder” from Lunarians. This track sounds like a blending of post-Gabriel Genesis and Mike Oldfield. The album closes with “Water to Glass / The Ultimate Solution” that blends floating piano runs, Mellotron, and symphonic progressive music to create an uplifting and majestic climax for the album. Though there are many touchpoints with 70s progressive artists, the music on Oceanarium is not derivative and is quite unlike anything you have heard. So if you have not heard Deluge Grander yet, do not waste any more time, you will not be disappointed.

Deluge Grander albums are always chewy affairs, full of dense and quirky instrumental textures, compositional detours, forays into music hall, classical chamber sonnets, and grooving rock. Fans will be pleased that little has changed with Oceanarium. As with past releases composer / keys player Dan Britton is at the helm with help from long-time collaborator Brett d’Anon (bass, guitar), plus a legion of guests who fill out the arrangements on strings, brass, reeds, and the kitchen sink. The arrangements are often wildly careening affairs with continuous shifts in dynamics, timbre, tempo, and mood, making Britton the poster child for musical ADHD. The lead track starts with some tasty garage rock riffing that is a departure from the kind of hyperactive prog this group is known for, but it’s not long before an abrupt left turn takes the listener down the rat hole. Which is literally what the concept behind this album is all about, as spelled out in the illustrated liner notes. In that regard Oceanarium is bit of an update on Genesis’ The Lamb Lies down on Broadway, but with no vocal guide so the adventure has to play out completely in the listeners’ mind — as long as the listener is paying constant attention. That’s the trick with all of Britton’s music. But the rewards are ultimately worth it, in the same way that Canterbury bands like National Health often required steady and repeated listening in order to reveal their charms. So dive in, but be sure the TV is off.