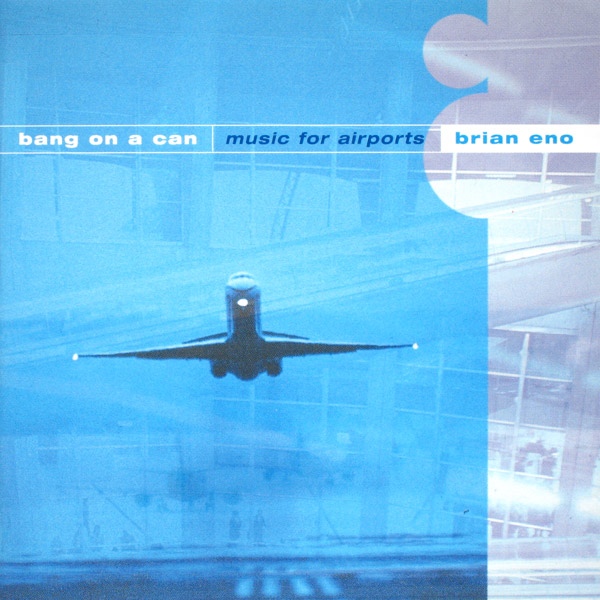 Ambient music has come a long way since 1978 when innovator Brian Eno drafted his original experiment for use in large international airports. The intent was for passengers to feel good about boarding their planes and allow a sense of calm to initiate itself with the listener, retaining this calm as the flight proceeded from take-off through landing. Eno had his work installed in several cities, with unknown results to most who did not reside in those locations. Bang on a Can is five musicians cast together to faithfully recreate the four original twenty-year-old pieces within a live setting. Produced by Philip Glass, the disc is faithfully rendered, although many additional parts and players have been utilized. There is a risk that the project has now been blown into the pretention of high art due to the use of three art directors. But none of the tracks suffers from recreation of heavenly voices, synth swells or watery piano. The presence of the composer himself gives strong credibility to the end work, though I undoubtedly prefer the original album. It does make you wonder what it would be like to experience this faithful adaptation as you stroll down the corridors to get your boarding pass at San Francisco International Airport. I hope to attend the local performance of the work in October and report on how this minimalist work has evolved into not only a grandiose production, but a satisfying atmosphere of contented relaxation.

Related artist(s): Brian Eno, Bang on a Can, Evan Ziporyn

Kaos Moon - After the Storm – Canadian band Kaos Moon, under the direction of vocalist/keyboardist/songwriter Bernard Ouellette, has a lot in common with other prog/pop bands of today. Their music has a sound reminiscent of...  (1995) » Read more