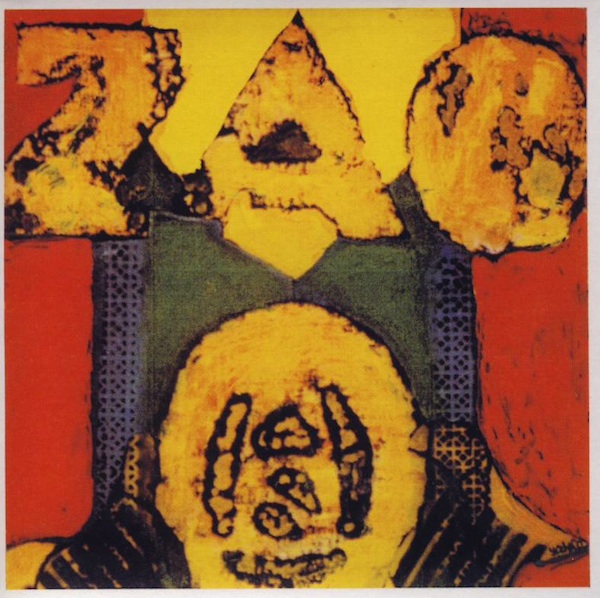 After a decade and a half, the zeuhl-fusion ensemble Zao are back with a release that is a real treat. While the lineup has changed from the classic formation which included Didier Lockwood on violin and Gerard Prevost on bass, the replacements do an admirable job filling their shoes. This time Francois Cahen (sampled pianos), Jean-My Truong (drums) and Yochk'o Seffer (soprano sax) are joined by Dominique Bertram (4/5 string bass) and Patrick Tilleman (violins). The tunes are still penned by Cahen and Seffer, and the good news is the spirit of their 70s output remains intact with Akhenaton. Sax and violin interact to create energetic melodies, licks, and harmonies over the busy drumming and bass playing, which doesn't rely as much on zeuhl stylings as it used to (consistent with the current trend in France among the first generation of zeuhlsmen) but works quite well anyways. The album opens and closes with a gentle duo of sax and piano, as if to state that this is still Cahen's and Seffer's band. Overall it falls just short of the classic Kawana, but in this day and age to hear musicians who've been around for a while coming back to their roots is mighty refreshing. For people who have never heard Zao before, this is as good a place to start as any. Technology has had a mixed effect on this outfit — while the drums and bass sound better than ever, the sampled pianos (electric included) are a bit cold and artificial. If Cahen's performance was less impressive the effect would have been even worse, but thankfully his playing is good enough to divert your attention from the weaker patches. To be clear, this style of prog is much closer to jazz and fusion than might be expected. Fans of the old Zao are sure to enjoy this comeback, one of the best comebacks this decade in fact. Recommended.

[For the record, Dominique Bertram was a member of Zao during the band's first reunion circa 1986, at which time they did some concerts in Paris, but he never recorded with the band. Zao's last album (the 5th) was Typareth from 1977, but Yochk'o Seffer did not participate on that one. Patrick Tillemann was a member of Forgas, Terpandre, and Gwendal, but was never previously a member of Zao. -PT ]

Zao should need no introduction for progressive fusion fans, as they were one of France's best groups of the 70s, releasing five albums, four of them essential listens. While Zao has reformed occasionally since 1977 for the occasional live show, they haven't released an album with Yochk'o Seffer (sax, ex-Magma, Perception, Speed Limit, Neffesh Music) and Francois "Faton" Cahen (keys, ex- Magma) together since the classic Kawana. Due to good sales of their reissued CDs (Kawana, Shekina, Z=7L — and Osiris is due for reissue soon), Seffer and Cahen have reformed the group back with drummer Jean-My Truong and two new (but not unknown) members: Patrick Tilleman (violin, ex-Terpandre) and Dominique Bertram (bass, ex-Magma, Neffesh Music). Cahen has traded in the 70s sound for the Wersi sampled piano immediately giving the album a more modern texture. Seffer's sax talents have improved over the last 18 years, going from an excellent player to virtual mastery over the instrument. Some of the sax solos here are simply dazzling. The overall effect is best described as the old Zao with a modern jazz feel to it. The themes and melodies are very similar to what Seffer and Cahen have done for the last twenty years, yet the production and style are more updated and less 70s progressive sounding. Dominique Bertam is the real stand out here, his bass playing is impeccable and some of his bass riffs are straight-out gems. The album starts out a bit slow, but once track 3 and 4 kick in, you're in for a treat, especially when the instrumentalists trade off — first Tilleman's distorted guitar-like violin playing followed by Cahen's sampled piano runs and more breathtaking sax soloing by Seffer. It doesn’t let up to the last track, which is a melancholy ending to the album's tremendous fire. Its amazing what the pioneering 70s groups can do when they stick to what they do best. This Zao reunion took me by surprise — I hope this isn't the last we hear from this quintet as Akhenaton is the surprise of the year. Highly recommended to progressive fusion fans.

Zao was a fantastic French fusion band that released a half dozen albums in the 70s. Formed by saxophonist Yochk'o Seffer and keyboardist Francois Cahen after leaving an early incarnation of Magma, Zao had a strong zeuhl sensibility, which gave their jazz-fusion stylings a unique character. Their best album, Kawana, was recorded in 1976, and shortly thereafter the band members went their separate ways. Now, apparently spurred by the recent Musea reissues of most of their back catalog, Seffer and Cahen decided to reform the band to record a new album. And how fortunate we are that they did! Akhenaton harkens back to the best of their 70s work; the zeuhl influence still flavoring their busy, driving fusion. With former members Jean-My Truong on drums, Dominique Bertram on bass, and Patrick Tilleman on violin, the band lays down some tasty grooves, serving as a foundation for Seffer's fluid soprano sax solos, as well as some nice lead work by Tilleman and Cahen. More structured parts of the music feature the trademark Zao harmonized and unison sax and violin melodies. The nine tracks on Akhenaton are all winners, providing a full hour of engaging music. The only complaint I have is about Cahen's choice of keyboards — he plays exclusively a Wersi sampled piano, which to my ears sounds about the same as the oft-loathed DX7 electric piano patch. A grand piano or a nice biting Rhodes electric would have given him a bit more dynamic range to play with, but Cahen is talented enough to make anything sound good, and the Wersi does fit in well in the context of this music. This minor caveat aside, Akhenaton is a top-notch fusion album and a must buy for all Zao fans.