The Jeff Gauthier Goatette — One and the Same
(Cryptogramophone CG128, 2006, CD) 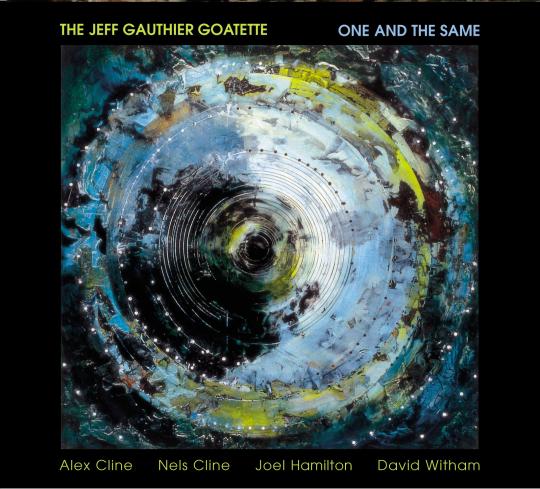 Violinist Jeff Gauthier is probably best known as for having spent time in the LA improv scene working with Alex and Nels Cline (who are prime contributors on this set of seven avant tracks). At times his work points to many of Jean Luc Ponty's arrangements with ambient textural embellishments. Three of the five players on the disc give a spacey unilateral direction to much of the collective jamming employing unison lead lines as reinforcement. "Solflicka" is straight of Ponty's classic Aurora era with both violin and keyboard playing off melodic and chordal accompaniment with some nice brushes from A. Cline. Keyboardist David Witham's straight ahead piano jazz accompaniment completely fulfills the promise of the piece. It's almost as if the persona of David Cross is playing on the disc with his familiar soloing reminiscent of some of the controlled chaos well documented in King Crimsons early 70s inspired forays. Ex-Headhunter Bennie Maupin's piece "Water Torture" is done up with with slack tempo and brooding low end from Joel Hamilton's probing bass line. The piece glides into ghostly terrain complete with guitar driven sirens and space rocket wows. Nels Cline contributes two pieces: "Don't Answer That" that opens with brother Alex's spitting cadenza before Nels unison duets with Gauthier leading into alternate round robin style interplay. The ensemble eventually builds some admirable tension with Gauthier soloing over drum and piano both doubling up. Overall this recording is a tremendous display of group interplay and dynamic control.