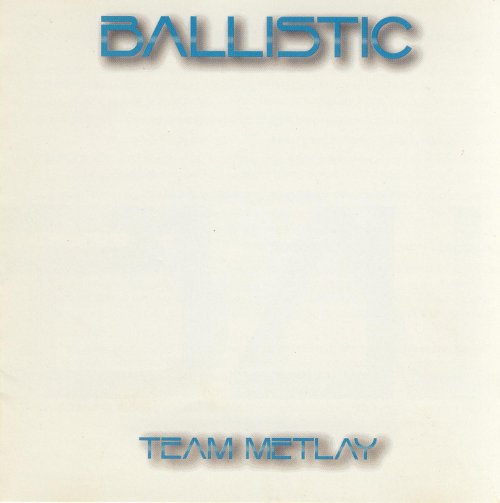 In 1990 a group of musicians from across the USA, previously known to each other only through e-mail, met in a Pennsylvania studio under the leadership of one Mike Metlay. During these sessions, this group (AKA Team Metlay) recorded Bandwidth. While Bandwidth contains a couple of musical gems, it is an uneven release and is appropriately viewed by the team as its alpha test. Having learned a lot from this experience, the team reconvened in January and August 1992 for their beta test and finally in December 1994 - January 1995 to record, mix, and master their current double CD, Ballistic. Over the intervening years the team has matured and added one or two members and now consists of Carl Brenner (Pelog [but no slendra] and ersatz lead synths), DAC Crowell (conventional synthesis, scientific instruments, beats, thrown gear), Eirikur Hallgrimsson (chromatic handstands and post production words of wisdom), Joe McMahon (one lousy box (ha), Badalamenti channeling), Mike Metlay (loops, pads, vectors, noises, bleen, panic, handwaving), John 3 Rossi (zap launcher, digital sample mangling, and Drum Fu), Nick Rothwell (MIDI difference engine, cube navigation, and out-of-range errors), Adam Schabtach (algorhythmics and four-handed Theremin), David Turner (technocrat, 6-op), and Steve Verity (virtual) (core dumps). You can tell just be reading this smorgasbord of credits that these guys had fun with this release.

The first disc, Trajectory, contains 17 tracks while the second disc, Impact, contains 12 somewhat longer tracks. Trajectory opens with short wave radio sounds and a female voice giving the news and weather for "Atomic City." You then begin a two and a half hour musical journey across both discs paying homage to such diverse artists as Vangelis, Popol Vuh, Tangerine Dream, Jean Michel Jarre, Klaus Schulze, Zoviet France, and Richard Pinhas. And just to provide that touchstone to remind you where you came from are the occasional news updates from Atomic City radio. This mixed bag of finely crafted electronic music culminates with "Aqua Regia;" 30 minutes of slow moving searing guitars and electronics that rivals Heldon. Ballistic is a monumental release and a testament to the hard work and dedication of these fine musicians. Highly recommended!