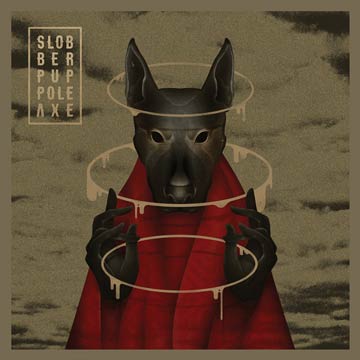 Not so long ago, we encountered Jamie Saft (keyboards) and Joe Morris (guitar) in The Spanish Donkey; for Slobber Pup they are joined by Balázs Pándi (drums) and Mats Gustafsson (saxophones), whom we heard together with Merzbow in the Cuts project. So the resulting Free Noise orgy is no surprise: three tracks of improvised interactions unhindered by any boundaries of style, genre, or convention. The lack of a bass player (that role was handled by Trevor Dunn on the first Slobber Pup release) contributes to a floating feeling to the music and leaves Saft free to do all sorts of unspeakable things to his analog keyboards in the lower register. (“Unspeakable” here being a synonym of “indescribable” because I can’t speak to what he’s doing.) This kind of unfettered improvisation runs the risk of alienating listeners, but that’s okay. You don’t have to make music to try to please everyone – it’s a futile task, so you might as well not try. In the case of Slobber Pup, they just hit Record and have at it, and to my ears at least, the result is commendable. I’m not going to listen to it every day, but it didn’t have me impatient to be done with it over the numerous times I’ve listened to it. Don’t be looking for melodies, harmonies, or even a consistent tempo, just spontaneous interplay between four really creative players. They listen to each other, react to whatever comes up, and there are lots of great moments ranging from quiet to screeching. Give it a shot if you’re in an adventurous mood, and now I’m going to go foxtrot a skyscraper.