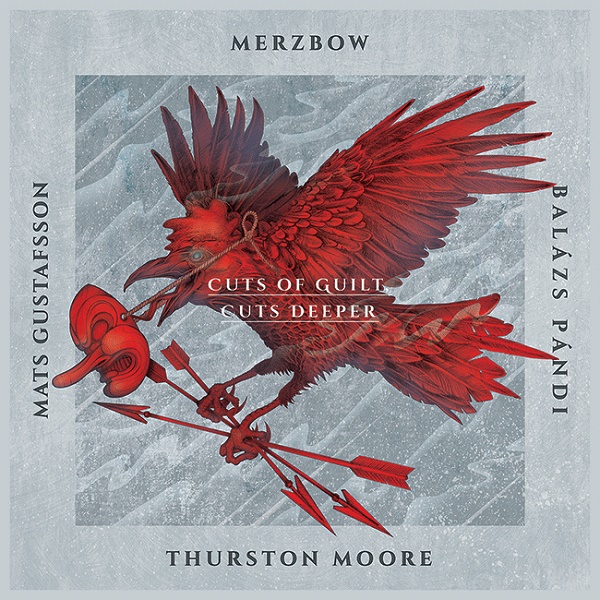 When you operate in a genre that can fairly be called Free Noise, you know you’re not going to be topping any sales charts (except possibly a chart that includes only Free Noise artists). This style is very far outside the mainstream of music, only likely to appeal to a highly specialized audience. It’s the sphere Merzbow has been bouncing around in for decades, and this collaboration features guitarist Thurston Moore of Sonic Youth (no stranger to abstract noise himself), Swedish reeds player Mats Gustafsson (who has worked with a large number of avant-jazz luminaries including Derek Bailey, Hamid Drake, Ken Vandermark, and Peter Brötzmann), and Hungarian percussionist Balázs Pándi (veteran of sessions with Wadada Leo Smith, Bill Laswell, as well as many previous Merzbow projects). To be fair, “pure noise” is an oversimplification of what’s going on here. Pándi’s drums of course are essentially non-pitched by nature, and in this case, Moore and Gustafsson avoid playing much in the way of normally pitched tones, and Merzbow does whatever it is that Merzbow does, presumably resulting in some of the more electronic sounds present. Luckily the result is not a constant wall of sound — there are ebbs and flows to the chaos throughout the four long tracks (the shortest coming in at 17:42), including long very quiet passages in “Too Late, Too Sharp - It Is Over” where there are sounds that seem to come from some kind of acoustic string instrument other than a guitar (though it could easily be Moore plunking on the guitar in an unconventional way). Merzbow, Gustafsson, and Pándi put out an album called Cuts in 2013, and it’s a bit unclear if they’re considering this to be a second release by that band (taking the name of the first album as the band name) with Moore added, or if that album and this one are two collaborations that happen to share three participants in common. In either case, for that segment of the listening public who have an interest in this kind of extremity, Cuts of Guilt, Cuts Deeper is a massive entry into the field, and the presence of real acoustic drums does a lot to both set it apart from purely electrified efforts and add a much-needed human touch to the mass of distortion.