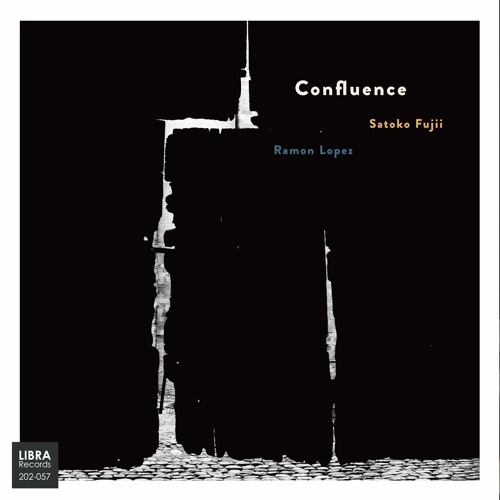 Our readers should know the work of Satoko Fujii well, as we have covered most of her releases as solo, and in collabortion, as well as with the many bands and orchestras that she leads, as a composer, pianist, conductor and much more since the mid-90s. Ramón López, not so much, in fact I believe this is the first time we have covered him in these pages, so by way of introduction, he is a Spanish mostly-jazz drummer and percussionist from Alcante, born 1961, with nearly 30 recordings to his credit going back to the early 90s, including collaborations with Rahsaan Roland Kirk, Joe Fonda, Ivo Perelman, and many others throughout the years. Fujii and López have known each other for several years, but had only played together once previously in a trio, Confluence is their first recorded collaboration, recorded as a duo in New York with no advance planning whatsoever; Fujii knew it would work and indeed it certainly did. López is a drummer who operates in a number of jazz styles as well as Indian style hand drums and percussion, and the opener “Asatsuyu” is a composed number by Fujii, showing both improvisers starting cautiously on their own familiar territory, but the piece begins to blossom after a couple minutes as López enters offering a strongly supportive presence. From the second cut, “Road Salt,” forward, all of the remaining pieces save one are purely composed-on-the-spot improvisations where both players seem to posess a telepathic ability to detect the others’ next move, making most of the eight cuts a truly satisfying listening experience. They do go a bit free and crazy at times, for example “Run!” but even in those moments it’s evident that López and Fujii are carefully crafting their moves together with an energetic rapport. The opening minutes of “Quiet Shadow” have Fujii subtly bowing the piano strings, the droning sounds offering Lopez a platform to wander freely until conventional piano sounds appear around the five minute mark. “Three Days Later” is Fujii’s other original composition, is a beautiful and graceful piece that allows plenty of space for López’ creative muse to blossom. There are many magical moments herein, and overall as purely improvised music goes, Confluence ranks among the best in recent memory.

Five Fifteen - Silver Machine & I Don't Remember – Here we have two four-song discs from Finland’s psychedelic progressive hard rock masters. The first (I Don't Remember) features a short version of a track from their album Six Dimensions of...  (2001) » Read more