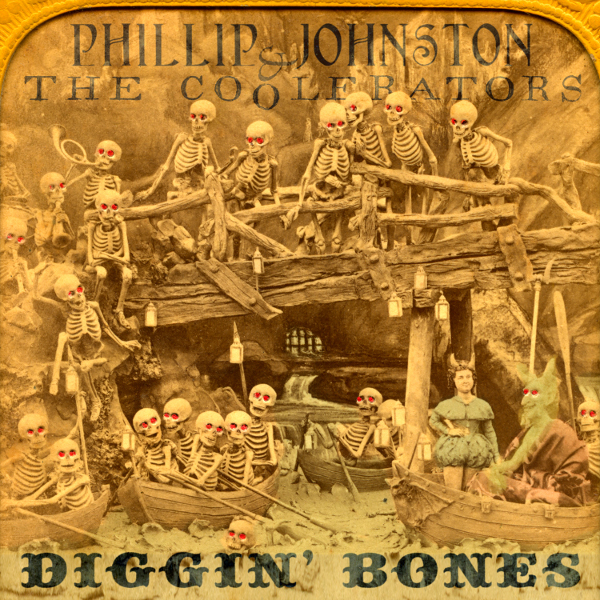 If Johnston’s name sounds a little familiar to some, it may be because he is a founder, leader, composer, and saxophonist of one of his other (many) bands, the New York based Microscopic Septet, with which he has released nearly a dozen albums going back to the early 80s, half of those on the Cuneiform label. He is also the co-leader of the Captain Beefheart inspired project Fast ‘N’ Bulbous with Gary Lucas, again with two releases on Cuneiform. But since 2005, Johnston has split his time between New York and Sydney, Australia, and is involved in many musical collaborations Down Under, including the Phillip Johnston Quartet / Septet, SNAP (a sax quartet with Sandy Evans), The Greasy Chicken Orchestra, and last but not least The Coolerators, who don’t have a huge discography yet, so you can say you heard about them first here. They are drummer Nic Cecire, an Autralian session drummer who has played on at least half a dozen albums by various artists and performed live with at least a dozen more; bassist Lloyd Swanton is a founding member of improvisational trio The Necks going back to 1989, with whom he has released close to thirty albums, and also a member of The Catholics, who have released eight albums since 1992, and is a member of the Alister Spence trio, among many others; organist Alister Spence came to my attention this year via his collaborations this year with japanese pianist and composer Satoko Fujii, but he has many more releases with the jazz trio and quartet that bear his name. Needless to say, Johnston is in good company when he’s not in New York. So what about the music on Diggin’ Bones? This is a collection of animated jazz instrumentals that combine playful melodies with folk and klezmer influences, Spence’s organ and Johnston’s saxes are in the spotlight most of the time, alone or together, but that’s no knock on the rhythm section, as Cecire and Swanton know how to give just enough to support the effort without dominating it, and they do get their time in the spotlight as well. This is fun and irresistable melodic groove music that invites the listener in without any reservations. One of my favorite numbers here is titled “Frankly,” but there are many more standouts (ten cuts total) that will still be playing in your head the morning after.