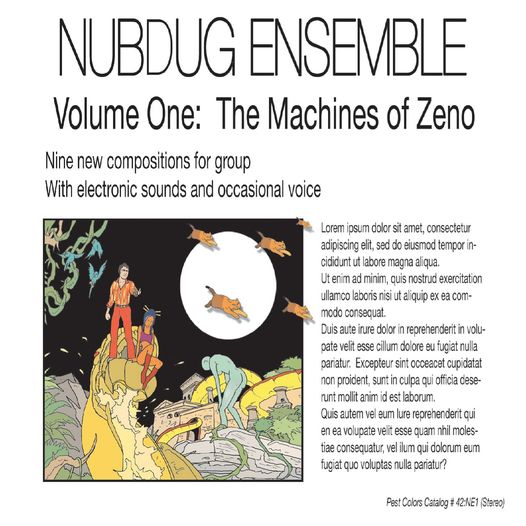 In 1989, Vacuum Tree Head was born in a garage in San Jose, California, a collaboration between two talented multi-instrumentalists, Michael De La Cuesta and Jason Berry, plus whatever musicians were open to collaborating with them at any given point in time. They played live shows occasionally, but mostly it was a studio project, and after dozens of cassette, CD and download releases (one would be truly hard pressed to find an itemized listing of their discography — discogs.com lists only four, but I have four times that many myself and I'm sure there are many more) and 30 years, Vacuum Tree Head ceased operations at the end of 2019 with the departure of De La Cuesta, and morphed into the Nubdug Ensemble. We got a sample of Nubdug Ensemble on the last VTH album Rhizomique at the end of 2019, where several tracks on that album were credited as such. Now one year later we have the next installment, entitled Volume One: The Machines of Zeno, featuring Berry and probably a dozen other musicians and vocalists, including Jason Bellenkes (saxes, clarinet), Myles Boisen (electric guitar, pedal steel, additional bass), G Calvin Weston (drums), Brett Warren (fretted and fretless bass), Sheldon Brown (flutes, bass clarinet), Amanda Chaudhery (synths, keyboards, electronics), John Ettinger (violin), Paul Hanson (bassoon), and vocalists Amy X Neuburg and Lucy Foley. Some of these folks play on every one of the nine cuts, others play on only a few. Only four of the cuts feature vocals, so as a whole this release is more instrumental than not, but the vocals, where they are, are uniformly excellent, as are the players. All of the pieces are written by Jason Berry, several in collaboration with Chaudhery and others, while Boisen handled the mixing and mastering. So what does it sound like? The arrangements tend toward the orchestral, one might hear the influence of Frank Zappa in many of these grooves, mixed with elements of soundtrack music, very little (if any) improvisation, and the vocals and lyrics tend to be sparse. The whole album clocks in at just shy of twenty minutes, but it’s an album side well spent, with amazing compositions and arrangements. One can sample every one of the album’s nine tracks on the band’s Bandcamp page (link below), be sure and check out the opener “Espejo,” “Alea Lacta Est,” and for the unusual, “Logjammin’” or “Prelude” will be the Rx.