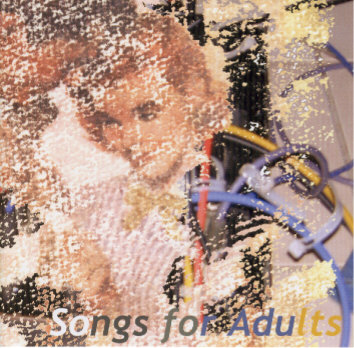 Starting with their premise that most music is designed for teenagers, Songs for Adults on the surface seems to be an irreverent and playful stomp through the perplexities of middle age, with titles like “I’m the Grumpy Old Man Now,” “Midlife Crisis,” “Remember the Time,” and “Thanks Dialysis Man!” with lyrics to support the concept. But man, this is really strange stuff… the music here is all over the map. I mean all over! Are these guys just goofing around trying to trip the listener up? Surely they can’t be serious! Then again, consider the cast of characters: Bob Drake (bass, vocals, synth, guitar, banjo, violin), David Kerman (drums, voice, percussion), James Grigsby (guitar, organ, voice), and Jerry Wheeler (lead vocals, trombone, harmonica). The first three should be well known to Exposé readers from their work in 5uu’s, MTG, U-Totem, and related groups, plus their involvement in other projects too numerous to enumerate here. Wheeler was a member of Giant Ant Farm (their contribution to the Residents tribute album Eyesore was a standout). But don’t be misled by thinking this is in any way comparable to the music of their regular more avant-garde endeavors (although the track “Tattoo Removal” is unmistakably the work of Drake). Most of these songs are pretty ‘square’ sounding at the core, though most feature bizarre effects and chaotic arrangements. So be warned, not what you’d expect from these players, but approached with the right attitude, this disc can be a real hoot.