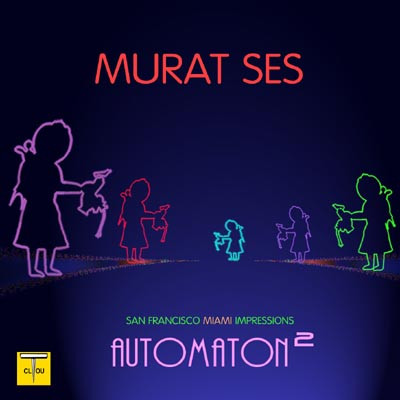 Automaton2 is Murat Ses’ fourth solo release. For those of you not familiar with Murat and his work, Murat is a Turkish electronic musician living in Austria. He spent some time working in the United States a couple of years ago and Automaton2 is his musical impression of the US, specifically San Francisco and Miami. The cover artwork, at first glance, looks a series of silhouetted aliens, but in reality are silhouettes of Turkish sherbet vendors. The CD consists of 13 tracks of East meets West rhythms and melodies. The high point of this release for me is “Polk Street," an amalgamation of disparate elements: urban beats, street cars, Chinese music, banjo samples, etc. that combine to create a delightful musical interlude. “Indian Creek” and “Eau Gallie” give some sense of Florida sunshine and summer. The tracks are well orchestrated and tight, the music enjoyable, and just the right touch for unwinding after a hectic day.