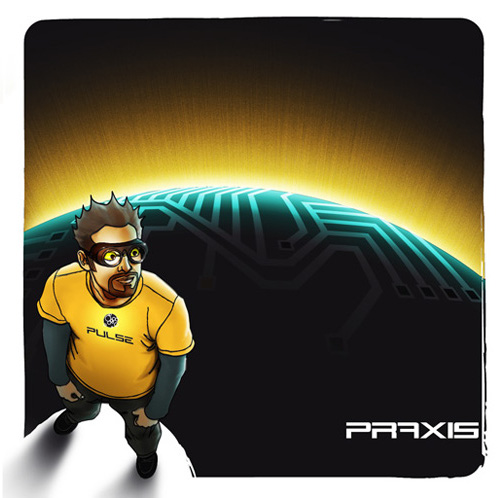 This French instrumental quartet brings a lot of influences to the table, although refined and presented in a fresh and progressive way. The band’s main composer is guitarist Guillaume Fenoy, who together with bassist Romain Gayral were both members of 4/3 de Trio, a band that bravely took the metallisms of classic Crimson into some adventurous new directions. And you’ll hear plenty of that here as well, plus the tension and release of blistering guitar, often encapsulated within multi-layered melodic cells. A strong influence of math-rock pervades the proceedings, along with surprising studio command using the power of stereo separation, achieving some stunning results in the dual-guitar interchanges. Joining them in this grand wielding of power and abandon are guitarist Sofiéne Yahiaoui and drummer Sébastien Touzeau, completing a high-energy workshop of complex shades and subtleties, thrashing forward with fury. The guitars often takes on a psychedelic tone, ripping wildly into frenzied solos that are barely controlled. The band even unleashes some outright punk mania on the closing track, vocals and all. All taken, this is a mighty impressive presentation of power and chops, supported by complex compositions, all trained toward a unified result. One could nitpick about how much of this has been done before; no doubt these guys aren’t breaking new ground in every measure, but they certainly are carrying an important torch forward. Fans of Crimson, Don Caballero, Tool and similarly inclined bands would do well to check this out.

Randy California - The Euro-American Years 1979-1983 – It merits discussion as to what, in the early 80s context, constituted the difference between a Spirit album and a Randy California album. Because nearly every Spirit composition in those days was...  (2008) » Read more