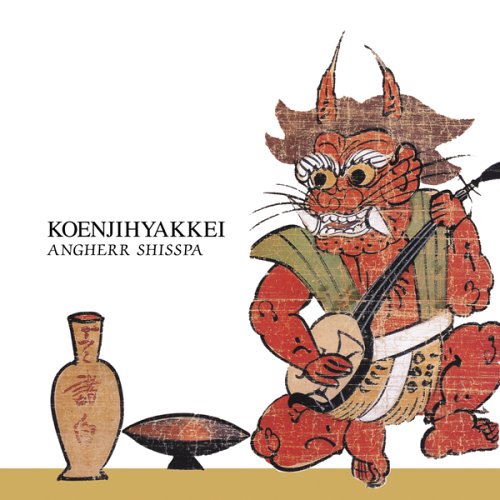 It’s been amusing to read the attempts of reviewers in the alternative / independent press to write about this album. They find the music so strange that they have difficulty describing it, even though some of them seem to like it. The crushing rhythms, dramatic vocals in an unknown language, the combination of Wagnerian bombast with jazzy inflections and rock instrumentation – in short, the Klingon Opera of rock – have no reference point for them. Of course, anyone who’s familiar with Magma’s classic recordings would have no such difficulty, as Koenjihyakkei fits squarely in the zeuhl tradition. All we have to do is describe the ways in which Koenji differs (or doesn’t) from Magma, and we’ve got the picture. We can also compare to earlier Koenji albums, so I went back to their debut for a little perspective. One important difference is that there is no longer any guitar in the band: drummer Tatsuya Yoshida is now teamed up with bass, keyboards, reeds (soprano sax and clarinet), and a dedicated singer, with everyone else singing as well. The lack of guitar, combined with the saxophones and the three female vocalists, gives the band a somewhat less oppressive sound, though it’s still pretty dense stuff. Miyako Kanazawa (keys) and Keiko Komori (reeds) are both extraordinary players, and really add to the proceedings, changing roles as the arrangements dictate. The lyrics are helpfully printed in the booklet, so you can all chant along with “Villba Quaranggi Irundoh Sillzza” to your heart’s content.