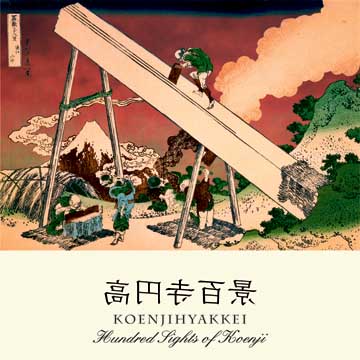 The latest entry from the ever-growing Japanese zeuhl scene is Koenji Hyakkei, a four piece of guitar, bass, drums, and keyboards, with male and female voice. Their sound lies firmly along the Magma-punk-noise axis; in fact on the first couple tracks "Ioss" and "Doi Doi," they've pretty much co-opted Magma's sound circa Üdü Ẁüdü. It should be no surprise then, that the drummer and main-mover in the band is none other than Tatsuya Yoshida of Ruins fame... As if Yoshida doesn't already have enough projects going on with Ruins, solo albums, and his Magma cover band "Mekanik Kommandoh." Those first two tracks are certainly good, even employing a mysterious tongue (not Kobaïan, but similar), but they seem to be missing some of the spiritual aspects of Magma's sound, and hearing them only makes me want to go and listen to the real thing. Fortunately, after the second track they find their own identity, mostly a punky, Magma influenced hard-edged sound that cuts deep, yet still contains enough stylistic variety to remain interesting. On two cuts in particular, "Molavena" and "Zoltan" — both penned by keyboardist/vocalist Aki — they tone it down quite a bit, allowing her room to show another side of her vocal talents, and also breaking up the otherwise monolithic feel of the album. On "Avedumma," guitarist Ryuchi Masuda shows his allegiance to Fripp. In all, this is an extremely good album, albeit a little harsh in places. Fans of Magma, Crimson, and of course Ruins, will find much here to appreciate.