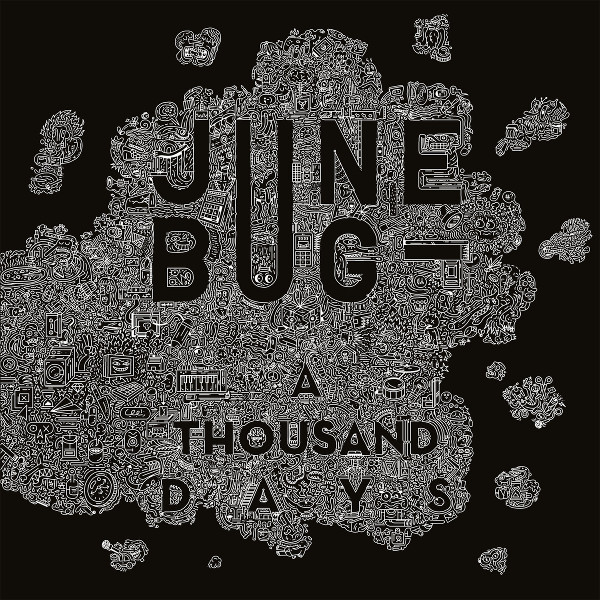 Bands (and the PR people who work for and with them) are free to describe themselves however they see fit, and in the case of June Bug “alternative folk music” seems to be a phrase they’re fond of. I don’t think they are deliberately misleading us, but in reality, you need to stretch definitions pretty far to make that one stick. Maybe the group started as an acoustic folk outfit — if they did, they’ve changed quite a bit since then. None of this is meant in a negative way: I really like this band’s music, and if they think of it as folk, that’s fine, but as a listener, I hear really creative electronic pop-rock fronted by an appealing female voice and backed by noisy guitars, aggressive synths, and simple but effective drums. Sarah June is the lead singer, and she has a lovely voice that would indeed work well in an acoustic setting, but is great on A Thousand Days where it contrasts with the harsh tones of the guitars and synths. She is not a flashy singer, presenting melodies without excessive adornment, and is often harmonized with herself, though her cohort Beryl Ben sometimes contributes harmonies as well. I’m occasionally reminded of Martha Johnson of Martha and the Muffins. There are times when treatments are applied to the vocals as well, for further variety. The backing parts consist of generally simple drum patterns with heavily distorted guitars (more in a Sonic Youth way than any kind of a metal way) and synth bass. There are also some really fun synth arpeggios on several of the tracks. Aside from the lovely contrast between the smooth vocals and the rough instruments, the songwriting is very good, with catchy melodies and interesting chord progressions. The lyrics are all in English, and there are many turns of phrase that I really like. A Thousand Days is a promising debut for a band with an interesting sound — just don’t be put off by the “folk” label that sometimes accompanies it.