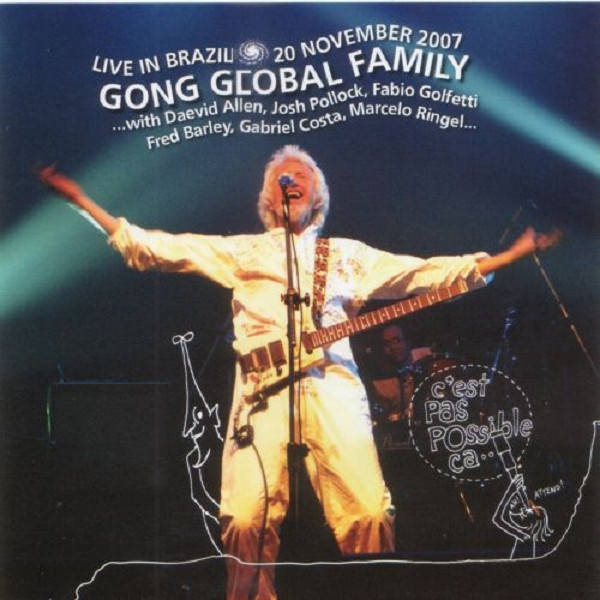 November 20th, 2007 is the date, one of three shows in Brazil that year. Daevid Allen and Josh Pollock (University of Errors) are joined by a number of Brazilian musicians (members of the Invisible Opera Company of Brazil) for a recap of some of classic Gong’s best material. The one-sheet and a short summary in the booklet claims that Michael Clare (U of E bassist) is here also, but if that’s the case they forgot to include him in the CD credits, and Gabriel Costa is already here playing bass. The band seems well rehearsed and up to the challenge of the most idiosyncratic and quirky material from the band’s classic years. The aforementioned three are joined by Fabio Golfetti (guitar), Marcelo Ringel (saxes), and drummer Fred Barley, making this a six-piece unit. Standouts include the eleven minute “Fohat Digs Holes in Space” and “Tropical Fish / Selene,” and along with “Inner Temple,” “Outer Temple,” “Master Builder,” “You Can’t Kill Me,” and others makes an excellent live set from a single show, lasting just a little over an hour. There are so many live Gong shows out there that one has to ask if this one is essential (or any more essential than all the others), and I guess the answer to that is in the musicians involved, who don’t appear together on any other. An excellent set all around.