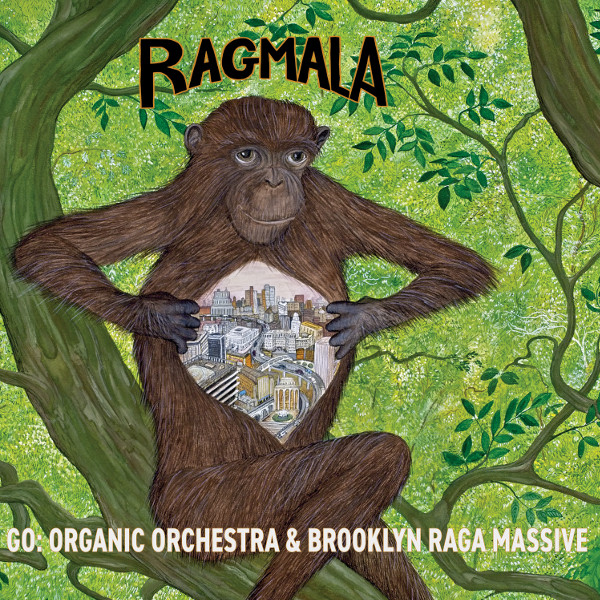 At its core, music is an ephemeral art which exists only in its moment of performance. In the hundred years and a bit, the advent of recording technology has changed this somewhat, allowing the performance to live on past its moment. During the span of time before that, we can only imagine the types of music and the kinds of sounds that people may have made. Many places around the world have developed lasting traditions of music that have persisted for centuries, sometimes codified in writing, sometimes passed down orally. European classical music gives us one widely-known tradition, and others in India, the Middle East, Africa, and Asia all provide alternative ways of looking at the creation of musical sounds. Percussionist / composer Adam Rudolph has developed his own system based on observations and analysis of music from many of these traditions, with a special focus on rhythm (see our interview with him for more on this), and his Go: Organic projects exist as real-world implementations of his ideas. Groups of musicians of varying experience and background will come together and get an introduction to the ideas, then are presented with “scores” which include some traditional notation and also diagrams presenting what could be called formulas to produce the pieces. The compositions will sound different every time depending on the instrumentation involved, the sensibilities of the players, cues from Rudolph himself, and other factors. Brooklyn Raga Massive is similar in some ways, being a collective of musicians from widely varying backgrounds who come together to present reflections and refractions of Indian music through a modern multicultural lens. Their rendition of Terry Riley’s “In C” is particularly relevant here, as it’s a composition with certain conceptual similarities to Rudolph’s pieces. Traditional Indian ragas can also be regarded as formulas for producing music, being based on a particular scale and rhythmic pattern (as a gross simplification) rather than set parts that will be played the same every time.

So to the recording at hand… There is of course no reason that a listener needs to know the origins or theoretical underpinnings of this music to enjoy it, and Ragmala is a consistently engaging set of pieces that likely sound like nothing you’ve heard before. The twangy droning of a tanpura is combined with tabla, mridangam, sitar, and Indian-flavored violin — so far, so expected — but there a battery of African and latin percussion, a full complement of strings, woodwinds, and brass, a rhythm section of bass, guitar, and keyboards, and a number of other unexpected additions, like overtone singing, harp, and didgeridoo — but all of the diverse sounds and voices are just part of the mix, a far cry from the kind of kitschy exoticism that happens so often when instruments from around the world are used outside their original contexts. These 40 musicians are working together to produce something new and unique that creates a world of its own by refusing to see the boundaries in our world. There’s just shy of two hours worth of music, far too much to go into detail about, but a few things stand out. First, there are sections of stark simplicity where only a very small number of musicians are participating, and at other times the whole crew takes part in gigantic blasts of sound. Both ends of this spectrum contain powerful moments, and the fact that both exist only serves to make the whole more complete. Second, the use of percussion is outstanding, melding a fascinating variety of drums, shakers, and other sound makers into a joyful percolation of energy, and Hamid Drake is outstanding on his drum kit. Taken as a whole, Ragmala is an achievement of impressive scale that deserves to be heard with ears as open as those of the musicians who made it.