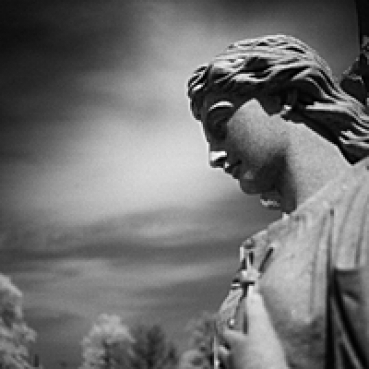 Van Zyl is probably best known for his Philadelphia based Stars End radio program, which he has hosted for over 30 years now, and his long running concert series The Gathering, which has hosted numerous electronic musicians over the years. I get an invite to every one of these shows, and I always regret being too far away to attend. Van Zyl is also a superb photographer, specializing in black-and-white infrared images (several of which grace this three-panel digipak release, and many hundreds more on his website). Over the years, his own music has taken a back seat to all these other activities. He is one half of The Ministry of Inside Things along with guitarist Art Cohen (with several releases to their credit), and has been involved in some other collaborative releases (The Sound Museum from 2001 and his early cassettes with Xisle), but aside from some early tape-only releases, MemorySpace is truly his first solo release. The nine titles on the disc form a continuum that seem to be merely parts of one long, ever-evolving composition. The material is proudly and firmly rooted in the classic Berlin School style – think of TD’s Phaedra or Rubycon, or Klaus Schulze’s mid-70s work as points of reference, or RMI for a more contemporary comparison. These pieces mix beautiful and colorful floating ambient dreamscapes with delicately sequenced runs that combine, contrast, overflow and crystallize into a singular fountain of imagination. MemorySpace affirms the importance of this classic style in the evolution of electronic music.