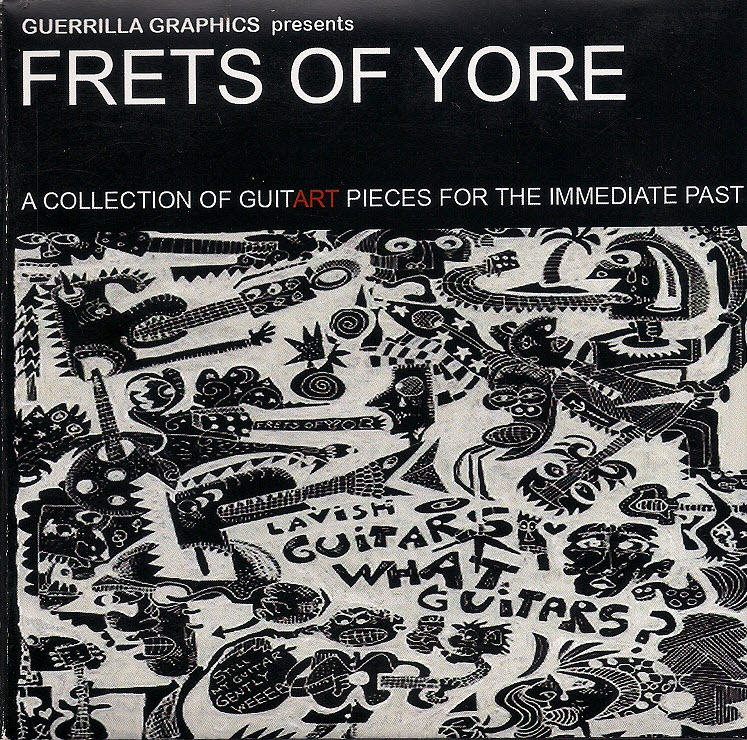 This is an old one, from 2017, and it’s very likely that the original CDRs with artwork inserts are no longer available anywhere now, but downloads from the Spectropol Bandcamp site are still available, and certainly worthy of your attention. The concept behind Frets of Yore, from the mind of producer Gonzalo Fuentes, is an interesting one, where various artists would submit 26 graphic art works (paintings, drawings, collage, photography, etc.) each to be interpreted twice by a number of different avant-garde composers, resulting in 52 guitar-based tracks most of which are less than two minutes each, including several well known guitarists – relatively speaking, from the art-rock underground. As it turns out, there are only 51 tracks, I have to presume that the total length probably exceeded the capacity of the CDR medium and had to be trimmed accordingly. The artwork that the compositions were interpreted from can be seen on the Spectropol Website (you’ll need to scroll down a ways), but it doesn’t identify each and which compositions were derived from them, so the listener will need to use their imagination a little.

The tracks start with “Unlengthed” by Andy Bole, a sitar-effected guitar solo piece amid atmospherics that clocks in at just under two minutes, which is a bit longer than most of the pieces here, but a very worthwhile one. Obviously I can’t comment on all 51 tracks in this overview, so I will restrict mine to the standouts, or at least those that stood out for me over the eight or so times I’ve listened to it all the way through. Mark Hewins’ “Dawg Song” is a slow and slightly disorienting piece with multiple layers of guitars and sampled voices. “Mr. Bubbles” by Brian Woodbury is a completely tweaked avant guitar piece utilizing acoustics and distorted electrics overlaid in a bizarre collage. Ron Anderson’s “Stitches in Time” is another chaotic piece for distorted guitars and what sounds like art-damage. “Strolling along Section W” by Dave Newhouse is a sublimely melodic piece that stands out among the rest. Nick Prol’s “What Do You Mean Tentacles?” is another bizarre masterpiece of quirk, chaos, and distortion. The shortest piece here is “Blind Angel” by Miroslav Wanek (the guitarist from Už Jsme Doma) which proceeds as if the whole distorted piece is run through a wah-wah after the fact – neat effect. Janet Feder's “I Remember Something” is another beautifully melodic piece tracked by a mysterious low end. Jerry King’s submission, titled “Pinguino e la Ragazza con i Funghi” starts out as another beautiful solo guitar piece with atmopsherics, then morphs into an almost Japanese sounding vignette. There are so many more great pieces here, submitted by the likes of Henry Kaiser, Fred Frith, Nick Didkovsky, René Lussier, Luciano Margorani, Mark Stanley, Andre Duchesne, and so many more. The best bet for the explorative listener is just to go to the Frets of Yore site and download it all for a mere seven bucks. Guaranteed to please!