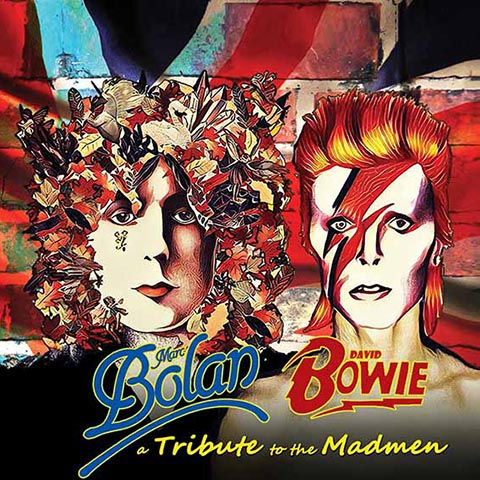 Since David Bowie’s passing in January 2016 there has been a resurgence in interest in his music, with his back catalog being reissued on vinyl plus various tribute albums. A Tribute to the Madmen, released by Black Widow Records in September 2017 is the first such tribute that features covers of songs by friends and musical rivals Marc Bolan and David Bowie. This 3CD boxed set also contains posters, cards, a badge, and a 16-page booklet, plus of course three and a half hours of covers by 25 bands and musicians, some familiar and others new. Most of the artists contributed a cover of a Marc Bolan song and another of a David Bowie song. The exceptions are Witchwood, who contributed two of each, and Electric Swan who only contributed a cover of Bolan’s “Midnight.” There is far too much music here is focus on specific bands and songs. Suffice it to say that some bands took the approach of emulating Bolan or Bowie while others used this opportunity to reinterpret these songs. Some covers are upbeat, while others have a dark and sinister vibe. One artist, Silvia Cesana and The Band surprised me with their covers of Bolan’s “Girl” and Bowie’s “Heroes.” Rather than the songs we have grown used to, Silvia’s versions are bluesy RnB renditions that work if you forget about the originals. Bands on this compilation that Exposé has covered in the past are Victor Peraino’s Kingdom Come, La Fabbrica dell’Assoluto, Presence, Il Segno del Comando, Sophya Baccini’s Aradia, Freddy Delirio, The Mugshots, Electric Swan, Landskap, and Blue Dawn. Plus Paul Roland, who has appeared on a couple of Fruits de Mer releases, kicks off the compilation with his covers of “Meadows of the Sea” and “The Prettiest Star.” The covers on this compilation span the careers for both Bolan and Bowie, and of the 49 songs, only “Ride a White Swan” is covered twice. Since I lost interest in Marc Bolan with The Slider, some of the Bolan tunes are new to me, so it is akin to listening to brand new music. A release of this magnitude is difficult to digest at one sitting, instead being best sampled over several days. Given the variety of artists and songs, if there is a song you do not like, more than likely you will discover another one that fits your needs.