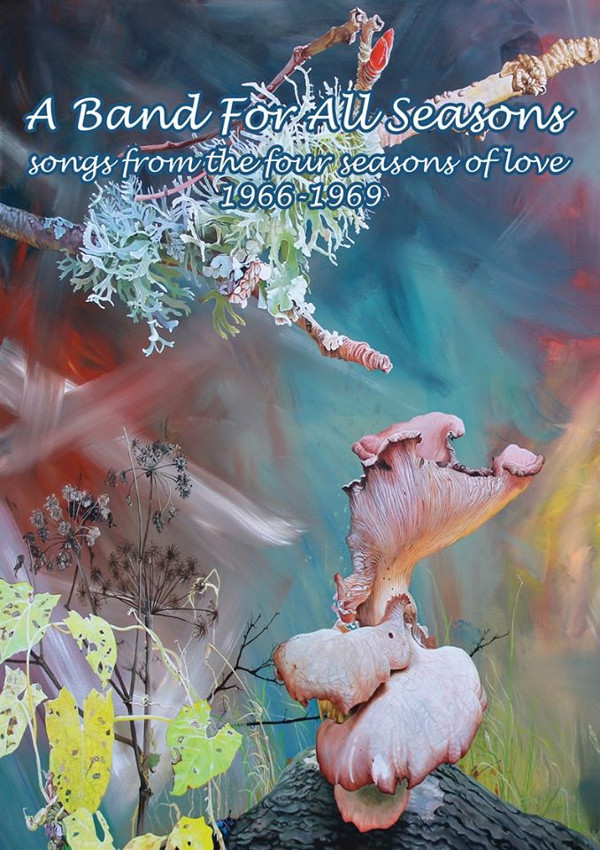 Two years ago in 2018, Fruits de Mer released a massive 3LP set The Three Seasons, covers of songs from 1966 - 1968 by many familiar FdM bands, new bands, plus The Yarbirds, The Pretty Things, and The Electric Prunes. Since The Three Seasons was such a success and sold out almost immediately, they decided to expand the set further to include covers from 1969. The result is roughly 4 ½ hours of music, which would required 7 LPs and that seemed a bit excessive, even for FdM. Instead Keith opted to release the first ever FdM CD release A Band for All Seasons, actually 4 CDs. Last Fall FdM released the 7-inch Sunny Spells teaser with Chad and Jeremy’s unplugged version of “Rest in Peace” and covers by Schizo Fun Addict, Hanford Flyover, and Us & Them. Since I have already reviewed 75% of the tracks on A Band for All Seasons, I think that it is only right to talk about the new music. The new music includes covers by FdM artists Jay Tausig, Cat Frequency, Vert:x, Nathan Hall, Claudio Cataldi, LoveyDove, Crystal Jacqueline, London Underground, Moon Goose, I Am Voyager 1, Elfin Bow, The Lemon Clocks, label newcomers Starlings Planet, Bhopal’s Flowers, Spygenius, The Jeremy Band, Mysterious Cloud, Echo Train, The Telephones, Mr. Armageddon and the Suicide Society, and Back Street Carnival, and 60s bands July, The Purple Gang, Fuschia, and Mark Brierly. And the covers are from familiar bands like The Beatles, Pink Floyd, Love, Nick Drake, and Tommy James and the Shondells to name a few, plus a number of obscure bands like Faine Jade, Hunger, and The Flies. FdM never ceases to astound by unearthing great obscure psych bands and songs, having them rejuvenated by contemporary bands. The high points for me are Bhopal’s Flowers’ excellent raga rock cover of Cream’s “I Feel Free,” complete with tamboura and sitar, The Mysterious Cloud featuring Your Friend’s cover of H.P. Lovecraft’s “Mobius Trip,” Echo Train’s cover of the Hunger’s “Portland ’69” that starts out repetitious and grows to a fantastic psych jam, Elfin Bow’s beautiful acid folk rendition of The Small Faces’ “Autumn Stone,” The Telephones’ jangly psych pop cover of The Move’s “I Can Hear the Grass Grow,” Mr. Armageddon and The Suicide Society’s superb cover of the Bonzo Dog Doo Dah Band’s “We Are Normal,” Nathan Hall’s cover of the Bee Gees’ “Please Read Me,” the Alain Pire Experience’s cover of The Beatles’ “Only a Northern Song,” and Crystal Jacqueline’s exquisite reading of Pink Floyd’s “Grantchester Meadows.” But the pièce de resistance of the entire set is The Lemon Clocks’ 17-minute extended psychedelic journey cover of Tommy James and the Shondells’ “Crimson and Clover.” If you were not one of the fortunate few who snagged a copy of The Three Seasons, make absolutely sure that you invest in A Band for All Seasons. FdM has certainly outdone themselves this time.