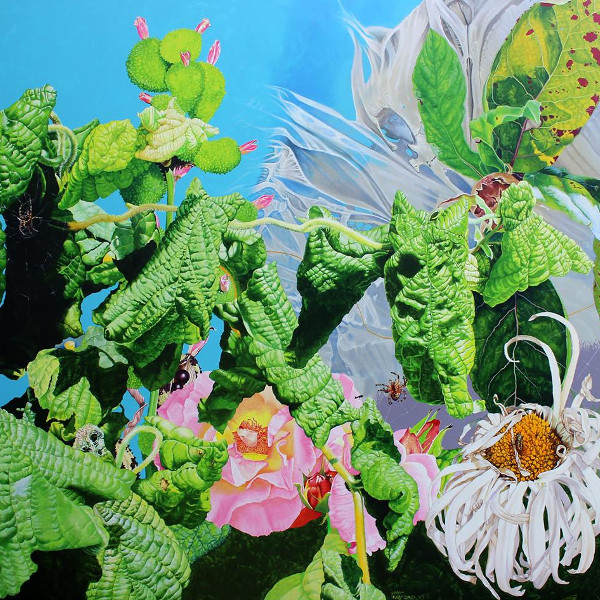 One of Fruits der Mer’s most ambitious projects to date was released on October 8, 2018, the three LP set The Three Seasons, celebrating the spring, summer, and autumn of love. The 27 tunes cover material from 1966 to 1968, some very familiar and others less so, that represents the peak of rock music’s experimentation at a time when anything seemed possible. Each of today’s bands has lovingly recreated and reinterpreted these gems from the past. In addition to Fruits de Mer’s usual suspects, they scored the trifecta of The Electric Prunes, The Pretty Things, and The Yardbirds on this set. The Electric Prunes perform a dark trippy version of Love’s “7 and 7 Is,” though it is not as aggressive as Arthur Lee’s original. The Yardbirds provided a live recording from 2016 of their “Think About It.” And The Pretty Things close the set with their performance of “Loneliest Person in the World” recorded at the Half Moon in 2010, demonstrating that they still have it together after all these years. In between are 24 excellent covers. The songs that caught my attention include LoveyDove’s cover of the fake psych band Drimble Wedge and the Vegetation’s (Peter Cook and Dudley Moore) song from the movie Bedazzled. This is swinging London at its best, but not quite as deadpan as Peter Cook's performance in the movie. Then there is Rob Gould’s cover of The Purple Gang’s “Granny Takes a Trip.” The original is a 2:38 minute upbeat jug band song that Rob has morphed into nearly nine minutes of excellent trance-inducing lysergic shimmering guitars that lend a whole new meaning to Granny’s trip. Anton Barbeau demonstrates an entirely different reading of Donovan’s classic “Sunshine Superman” that grows on you the longer you listen to the song. Moonweevil presents a slow mind expanding cover of The Deviants’ “Child of the Sky.” Now I have never considered Neil Diamond as a psych musician, but apparently Aunt Cynthia’s Cabin thought so by producing an acid drenched edgy cover of “Solitary Man.” And no Fruits de Mer compilation is complete without Icarus Peel, Crystal Jacqueline, and The Honey Pot. They present an excellent cover of The Rooftop Singers / Simon Dupree song “Kites.” Crystal Jacqueline has never sounded better, with her vocals soaring into the stratosphere, as well as Icarus Peel’s inspired guitar solo. Plus Icarus Peel also provides an outstanding cover of Jeff Beck’s wonderful “Beck’s Bolero.” Cary Grace surprises everyone with her cover of Jimi Hendrix’ iconic “1983 (A Merman I Should Be …)” with her version being the yin to Jimi’s yang. Then we have Austin’s own Proud Peasant covering Touch’s “Down at Circe’s Place,” which Fruits de Mer happens to be reissuing on 7-inch this December. Xander and bandmates have outdone themselves on this tune, sounding different from everything they’ve released to date. And what I think is the last noteworthy cover is Consterdine’s recording of J.K. & Co’s “Fly,” a slowly floating trip propelled by some masterful Mellotron. The Three Seasons is undoubtedly the finest Fruits de Mer release to date, introducing some long lost treasures to the modern world. If you haven't already snagged a copy, be sure to find one.