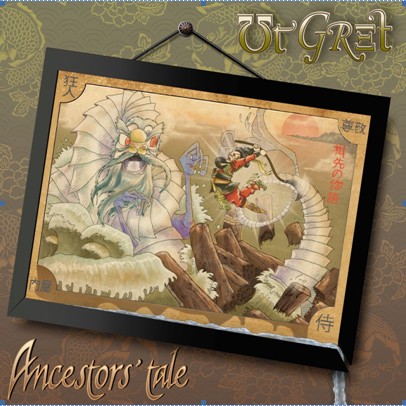 The follow-up to 2011’s Radical Symmetry is a further refinement of Ut Gret’s unique musical vision. Ancestors’ Tale represents the crossroads of many different seemingly incongruent styles, but presented with the masterful hands of this group that seems to be able to make anything work, whether inside or outside the box. The ten tracks here cover about an hour, and brim with invention at every new turn, combining spirited rock with elements of chamber, jazz, world folk, impressionist classical, improvisation, and avant-garde, all based on exceptional compositions mostly by bassist, guitarist and de-facto bandleader Joee Conroy and keyboardist Steve Roberts either alone or together or in combination with other band members. There are vocals, but not a whole lot of them, courtesy of singer Cheyenne Mize who may remind listeners just a smidgen of Thinking Plague during her vocal parts, while at other times she is contributing on violin. But overall, this is for the most part an instrumental effort, with strong arrangements utilizing the band’s powerful woodwind section of Jackie Royce, Steve Good and Greg Acker (the latter doubling on percussion), which includes flute, basoon, contra-bassoon, clarinet, bass clarinet, bari sax, and even occasional didgeridoo. Roberts’ preferred keyboards include electric piano, piano, Mellotron, and occasional organ, vibes, marimba, and samples. Drummer Gary Pahler connects all the dots and provides the necessary structure, wherever that structure is needed. As one traverses these cuts, reminders of the work of other classic progressive artists may make fleeting appearances: Soft Machine and other prime era Canterbury bands, Univers Zero (with all those woodwinds, how could it not?), and the strong influence of mid-70s King Crimson is in evidence on many of the later tracks. There’s a lot of brilliance and originality herein, and it’s very hard to stop pushing that replay button, as each spin reveals something new or presents something familiar in an entirely new light.