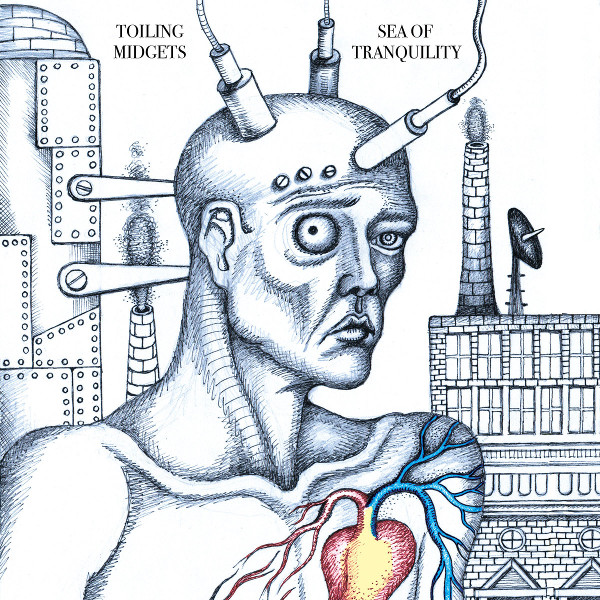 After seeing the name Toiling Midgets around for decades, Sea of Tranquility is my first time actually listening to them. This music could be described as (mostly) instrumental post-rock, though not of the variety that revels in lengthy tracks that build up very gradually to crashing finales. Their tunes are concise, in the two to five minute range, almost like a post-punk variation on the idea of surf rock — and by that I mean they take the overall sounds of their contemporary rock music and produce instrumental variations on it, much the same way that classic surf rock took the sounds of 60s rock and used instruments instead of vocals to carry the leads. If you imagine the alternative rock of the 80s and 90s, you’ll find a lot of those sounds here: distorted guitars drenched in reverb, throbbing bass lines, pounding drums heavy on the toms, washes of feedback. Each of the ten tracks on Sea of Tranquility is a distinctive entity, pulling the band’s sound in a slightly different direction, with “The Bugs” dispensing with the drums for free-floating atmospheres, “La Di Da” bringing in some vocals with an almost-bouncy beat, “Grazing Stars” featuring acoustic guitars and what might be backwards piano, and “The Long Summer,” which is just plain weird, with numerous vocalists singing and speaking in various languages over a backing that keeps changing, and sound effects of dogs barking and seagulls keening. In all, three of the tracks feature singing in a prominent role, and those are my least favorite tunes, though they are still enjoyable and contribute to the variety. While the individual tracks are relatively short, they are sequenced very nicely, providing the feeling of an epic journey through strange territory.