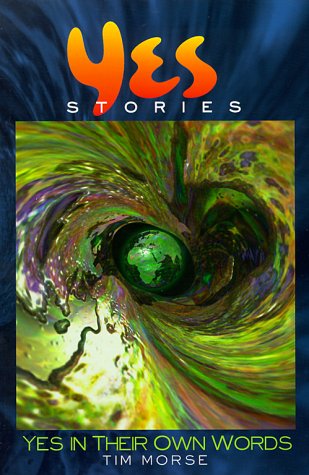 These are times of plenty for Yes fans. The band is coming out with a plethora of new releases and solo projects, as well as gearing up for some major touring in 1997. On top of this, two new printed works on the band have hit the streets. Bill Martin's The Music of Yes will be taken up in the next issue of Exposé. For this issue, we turn our attention to Yes Stories by Tim Morse and published by St. Martin's Press (ISBN #0-312-14453-9).

What Morse has done is literally collect "Yes stories." For the most part, the book is a collection of quotes culled from a vast array of books, magazine articles, videos, fanzines, as well as his own personal interviews. It's all been organized into chapters covering the different albums as well as other interesting topics such as band members' personal desert island disc lists. While some of the material dates back to the early 70s, most of it is no older than five or six years. This is the book's strength, in that it provides a sense of perspective on the band's history from those who were directly involved in creating it. Unfortunately Morse was unable to interview several key band members, most notably Jon Anderson and Rick Wakeman, which gives the book an uneven feel.

Probably the most revealing and valuable remarks in Yes Stories are from Peter Banks. For instance, it's generally not understood how much of an influence Pete Townshend and the Who were on the early Yes, particularly Banks and Squire, even down to band naming strategy (shorter names mean bigger sizes on posters). Some of Banks' observations about Yes after his departure seem transparently indifferent, especially considering how much his follow-up band Flash was modeled after what he had been doing in Yes, and indeed what Yes themselves were doing at that time. I was left feeling that Banks is still carrying some lingering baggage about being dropped from the band. This sense of barely concealed resentment is evident from Patrick Moraz as well. One quote from Moraz (1991) has him leaving Yes of his own accord whereas four years later we see that he was "eased out of Yes" because "Brian Lane wanted to have Rick Wakeman back in the band." Morse lets Moraz get away with what is, at best, a partial accounting of the truth, but even as such it is revealing.

As usual, Bill Bruford provides commentary on his time in the band (and on being a musician in general) that is simply priceless. For instance, "I love seeing the whites of an audience's eyes instead of being stuck in the back and seeing John Wetton's ass." Throughout the book, Bruford is fresh, honest, and direct. The greatest revelations wrought from the interviews deal with how much people seemed to not get credit for their writing contributions, especially Alan White, who seems to have had his hand in just about everything. Unfortunately, some of this comes off as sour grapes and only reinforces the feeling that for many, especially former, members of the band, they've never been able to rid themselves of some of their ill will toward other band members.

For serious fans of Yes, much of the information in the book is old news, and unfortunately Morse decided not to dig into any of the more complicated or controversial issues around the band. This is really a shame because this could have been an opportunity to shed some light on many topics still shrouded in confusion. For example, we still know little about the period of time in 1974 when Chris Squire supposedly contemplated leaving the band. Or the circumstances and real history of the band during the aborted follow-up to Tormato (the "Paris sessions"). Morse is obviously a big fan of the group and this tends to hurt the overall objectivity of Yes Stories. I sense that when it comes to some of the stickier issues, Morse was a bit too hands off. Perhaps this was the price he had to pay to get these interviews lined up in the first place.

Regardless of how "P.C." it is, Yes Stories is still packed with enough nuggets of interesting commentary that even a seasoned, hard-core fan will find something of interest between these pages. And as a labor of love, Tim Morse should be proud of his effort.