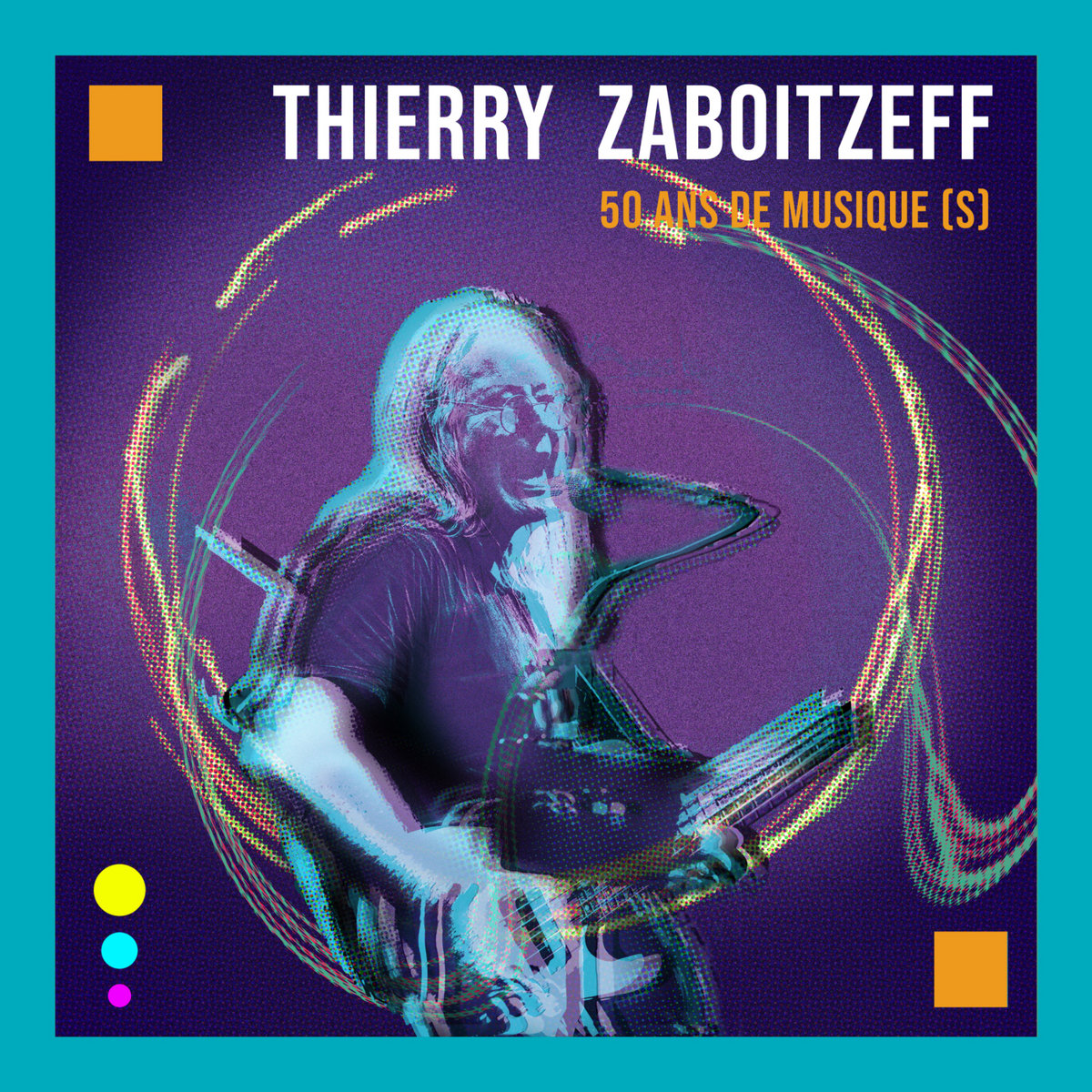 For over 50 years, Thierry Zaboitzeff (TZ from here forward) has been a working musician in France, and more recently in other countries (Switzerland, Austria, etc.), honing his craft, first as a guitarist, then bassist, cellist, and full-on composer and multi-instrumentalist, such that he has produced enough recorded material to release this three-disc career-spanning retrospective set, 50 Ans de Musique. TZ and his good friend the late Gerard Hourbette began playing together as teenagers in the north of France, TZ on twelve-string guitar and Hourbette on violin and percussion, eventually joined by a bassist, the trio taking the band name Rêve 1. They eventually met up with guitarist Rocco Fernandez, who had his own band, Art Zoyd, that had just recorded and released their first single, “Sangria.” TZ and Hourbette joined Art Zoyd in ‘71, making the band a quintet, but with musicians leaving and joining the band with regularity, the day came when the band’s bassist left, and as a result TZ was switched to playing bass. The next few years were not easy — the band was playing live a lot, all over France in fact, but barely surviving, living in camps and tents between gigs, but all the while further developing their own style of experimental rock music. In ‘75, with no further releases up to that point, Fernandez — who up to that point had been the band’s sole composer — retired from the band and left its direction up to TZ and Hourbette. Later the band’s drummer left, and they decided to go forward without drums, later releasing their first long-player Symphonie pour le jour où brûleront les cités, released in 1976. By this time Art Zoyd was becoming better known, playing festivals, touring with Magma, and developing a following. From the late 70s until 1997 when they parted ways, TZ recorded another dozen albums with Art Zoyd, eventually striking out on his own to record soundtracks, commisioned pieces pieces for modern dance, and much more, as well as forming the bands Zaboitzeff & Crew and Aria Primitiva.

The three discs herein are packed to the limit of the medium with tracks from throughout his long career, most taken from the 18 or so releases post-1997, including some live versions that are available nowhere else, but also including tracks from his two solo albums he released while he was still a member of Art Zoyd, several classic Art Zoyd pieces, a handful or so by Zaboitzeff and Crew, a couple splendid examples of Aria Primitiva, even TZ’s own version of Art Zoyd’s first single from 1971, as a tribute to the band’s founder Rocco Fernandez. Throughout one will hear a variety of styles from neo-classical to soundtracks to avant-garde pieces to some wild encounters with electronics, from all over the musical map. The first disc contains the entire fifteen minute “Pagan Dances” from 2021, the standout “Epreuves d’acier – Fragments d’une Forge,” recorded with members of Art Zoyd in 1995, and “Mein Augenstern” from the re-recorded version of Nebensonnen, among many other surprises. On the second disc one will find an except to TZ’s soundtrack to the classic silent film The Cabinet of Dr. Caligari, the spacy and hypnotic “Mariée à la nuit” recorded with Erik Baron / d-zAkord featuring six electric guitars and three basses, from his album Sixteenth (2012), and the groove-electronic standout “Die Maschine” from his Multiple Distortions CD. Disc three kicks off with the adventurous “Sleep No More” from the debut album by his trio Aria Primitiva, a song that has its origins back on the Art Zoyd album Nosferatu; a few tracks later we have the full fourteen minute “Aria Primitiva” from the same album. “Children’s Corner” is a beautiful melodic piece that dates from his early 90s solo album Dr. Zab and his Robotic Strings Orchestra. While much of the music presented here is instrumental, TZ does have some amazing vocal pieces included, one of which is “Introitus” from the 2004 Zaboitzeff & Crew album Missa Furiosa, a bit reminiscent of early Magma, but with a more electronic bent. Even if a listener knows little or nothing of TZ’s work, or even only his earliest works with Art Zoyd, the 43 tracks of 50 Ans de Musique provide an outstanding introduction to his long and varied career, and one that I can strongly recommend.