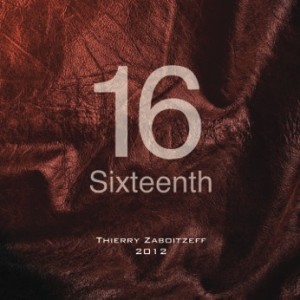 Hard to believe that “Dr. Zab” now has sixteen releases to his credit, but it’s true. And of all, this is one of the most eclectic, offering a wide palette of ideas and styles, shifting gears from one track to the next, so much so that it’s often a difficult one to summarize, but it’s nonetheless listenable while being highly explorative and original. For the most part, Zaboitzeff plays all the instruments here (bass, guitars, cello, samplers) as well as some vocals – although the primary focus is on instrumental work. Isabelle Farmini provides beautiful soprano voice parts to four of the cuts, two of which feature lyrics, and Erik Baron’s d-zAkord (a group of five guitarists and two bassists) is featured on one other track. Some of the material here could fit in well with some of his soundtrack material, while other pieces are very rhythmic and aggressive, offering a strong and potent mix of jazz, ambient, ethnic, weird mutant rock, and even touches of zeuhl. Opener “Slippery Nights” is a case in point, offering a curious strangeness that is instantly compelling. “Ov.6” represents a slower building melody working within some haunting dreamlike atmospherics. “Free at Last” pits intense bass and electronic grooves over the famous speech by Dr. Martin Luther King, gradually adding some clever melodic twists and rhythms. After a chaotic start, “Schluss mit Kunst” finds a curious electronic oriented groove fed by samples and some intense guitar buildup. “Touch” combines a variety of electronics (textures and samples), female voice and guest beat-boxing into some very innovative results, perhaps one of the disc’s most interesting cuts. While this disc tends to shift around in some strange unexpected directions, it nonetheless makes for a very interesting listen beginning to end.