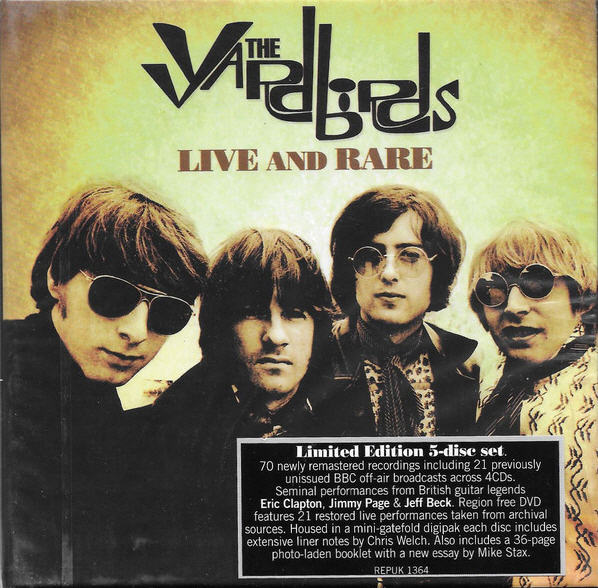 The 60s were turbulent times, the decade where rock music grew up, going through a number of phases and reaching new extremes as time went forward. Within the span of just two years, from 1963 to 1964, The Beatles suddenly owned the radio airwaves, and a whole new crop of British bands followed in their wake, some very clean, poppy, and polished like Herman’s Hermits, Gerry and The Pacemakers, and Peter & Gordon, while others were bluesy and gritty like The Kinks, The Animals, and the most famous of them all, The Rolling Stones. In America, for a couple of years. all these new British acts were taking over the airwaves and the charts and pushing much of the older styles aside and into the dustbin of history. Among all these bands, one of the most exciting was The Yardbirds, starting their engines in mid-1963, and releasing their first single in early 1964, they were of the bluesy style but innovative and quite eclectic, and through the five year period from ’64 to ’68 they left an indelible imprint on rock music that remains influential to this day.

This five disc boxed set (four CDs and one DVD) focuses squarely on their many radio sessions and TV appearances, as well as live recordings from those years, many previously unissued, 70 cuts total, all remastered for the best possible sound. The DVD presents six different clips, the first starting in July ’64, the last from March 1968, all black and white and in glorious mono, and as one goes through these one will hear different versions of many of the same cuts played by different lineups throughout the band’s history – “Over Under Sideways Down,” “Train Kept A-Rollin’,” and “Shapes of Things” are heard at least three times each on the DVD, each version featuring different lineups from different periods (of course, fans want to hear the hits), but there are a lot of great lesser known cuts interspersed between these. The DVD also stresses the importance of the contributions of all of the band members. The four CDs are grouped chronologically, the earliest being 1964-1966 Live at the BBC and Other Broadcasts, which starts in the early Clapton era but after track 9 it’s the classic five-piece lineup of Keith Relf, Jim McCarty, Chris Dreja, Jeff Beck, and Paul Samwell-Smith for the remainder of the disc's 25 tracks, and for much of the next disc, 1966 Live and Rare, which also contains some rare studio tracks, a couple commercials, and the A & B sides of two Keith Relf solo singles, which feature session players. The next disc chronologically focuses on three great live sets by the four-piece with Chris Dreja on bass (replacing Samwell-Smith), and Jimmy Page on guitar: 1967 Live in Stockholm, Offenbach and Paris, each of which contains several superb performances of the band’s best known material. The final disc, featuring the same four-piece version of the band, is 1968 Dazed and Confused, which features two classic radio sets from March of that year, as well as an on-air interview with Jimmy Page.

Finally, there is the 36 page booklet with an essay by Mike Stax of Ugly Things magazine, which focuses on the contribution of five key band members through the years, avoiding their better known mercurial and sometimes controversial lead guitarists who came and went over the years (which is a story everyone knows already), as well as many rare photos, quotes, concert posters and exhaustive documentation as to who played what on each of the tracks. In addition, each of the discs (including the DVD) contains its own booklet which focuses on that particular period of the band’s work. Finally — this really needs to be said — Live and Rare is a set that serves as a package for completists, and if you don’t know the band’s work yet, one might be better advised to first fully absorb their original albums, or any of the excellent compilations that have been made available over the years, then move on to this outstanding collection.