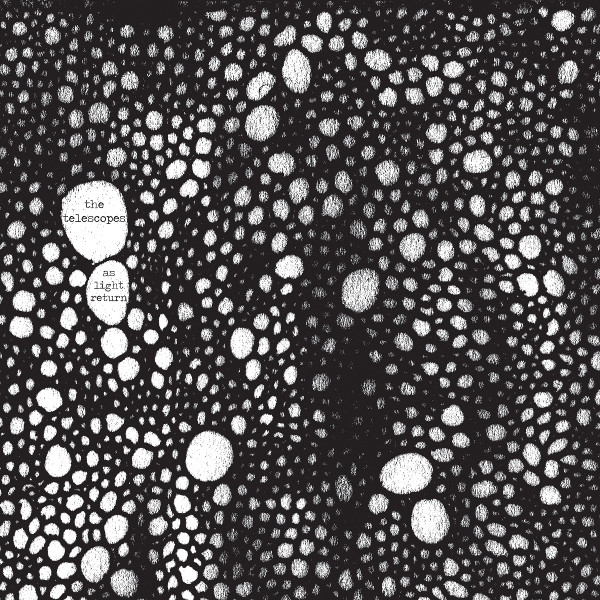 Since 1987, Stephen Lawrie and a variety of different musicians have been performing live and recording under the name of The Telescopes. As Light Return is their ninth album, their second on Tapete Records. This changing band makeup has become part of Lawrie’s concept, varying from concert to concert and release to release. My only other exposure to The Telescopes is their 2012 7-inch Black Eyed Dog on defunct Irish indie label Trensmat Records. That EP featured a cover of Nick Drake’s song and is vastly different from the wall of noise and distortion on As Light Return. Belying the uplifting title of As Light Return, the five instrumental tracks are a dark and blistering sonic assault, just like Acid Mothers Temple at their most abstract. Lawrie has over-processed his electric guitar to produce screeching feedback and layers of distortion with interacting overtones that sound like a spongey wall of sound, which is also conveyed by the cover art. Sometimes there is a detectable rhythm and percussion track buried under the noisy sludge like on “You Can’t Reach What You Hunger” or “Something in My Brain.” On the other tracks it is as if time stands still and all you experience is an endless, merciless sonic attack. If you listen carefully, you may detect the sibilant sounds of subliminal vocals. Only on “Something in My Brain” can you actually distinguish a voice and some of the words, which I guess is the something in Lawrie’s brain. Overall the music reminds me of Canadian Aidan Baker’s project Nadja. And I guess As Light Return answers the question of what do you get when you over-process the guitar? A “Hand Full of Ashes” or a “Handful of Ashes,” tracks 3 and 5. While not an engaging disc, this music requires a discerning palate to fully appreciate.