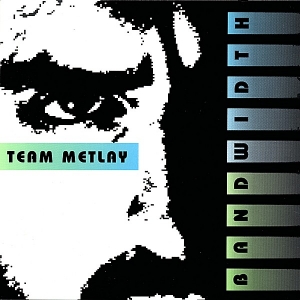 Back in the summer of 1990 Mike Metlay formed Team Metlay from among fellow participants in the electronic music discussion sessions on the Internet. For those of you not yet on the information superhighway, the Internet is a computer network that connects computers all over the planet. [Remember, this review is from 1994. -ed.] Through the media of electronic mail and newsgroups people communicate on a wide variety of topics, usually only knowing each other as lines of text on a screen. In response to Mike's invitation eight Internet musicians met in Pittsburgh, Pennsylvania in December 1990 to record the seven songs on this CD. Each song involved a single musician's germ of an idea which then grew to fruition through the interaction of the "team." Consequently Bandwidth has more in common with a compilation album than an album by a band. The "team" made an excellent choice for the opening song. "The Hinge of Fate" is melodic e-music with fuzzed synths much like Mark Shreeve. The next song, "Nestrophonie," has a fast beat with a heavy drum machine line along the lines of 80s East German synth music. It doesn't explore enough ideas and is just too long. One of the high points of the CD is "Oxygen Feed," an eery slow piece of space music in the style of Chuck van Zyl or the Nightcrawlers. On "March of the Plastic Ants" the drum machines are back with repetitive synth figures like Mark Shreeve's more recent work. Hot on its heels is "Killing Chrome," with yet more drum machines that overshadow the music, much like what you hear as the credits start to roll. The "team" now takes a step into an entirely different realm with "Madeira." "Madeira" is a slow quiet piece of jazz trumpet that could have been Miles Davis. Closing out Bandwidth is the by far the longest song, "Loremarie," which comes the closest to New Age with its quiet piano and Rodelius-like structure. Though it is an uneven release, Bandwidth has some excellent songs that make it worthwhile to own.