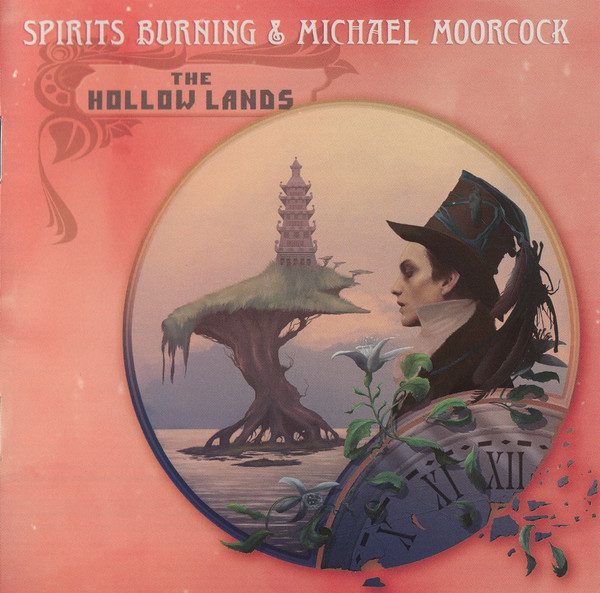 After the disappointment that was An Alien Heat, my expectations for the next Spirits Burning collaboration with author Michael Moorcock were quite low — in fact I dreaded listening to it when it arrived. I’m happy to report that this album is a significant improvement over An Alien Heat, and is in fact a pretty decent collection of space rock tunes. Most of the participants are the same across the two albums, with members of Blue Öyster Cult, Hawkwind, Strawbs, Camper Van Beethoven, Chrome, and more participating. There are a couple of tracks that fall flat, but for the most part The Hollow Lands works well and is (as expected) comparable to other contemporary space rock, with catchy grooves, lush keyboards, and science-fictional themes. Jonathan Segel’s violin graces three tracks to great effect, and William Kopecky provides some wonderful fretless bass on a couple of tunes. Quite a few tracks feature narration and remind the listener that there’s a story going on through the songs involving Jherek Carnelian, a time traveler stranded in late Victorian England, and his search for a time machine to return him to his own future era. The novel of the same name was originally published in 1974, the second part of a trilogy that started with An Alien Heat and finished with The End of All Songs. I suppose if you’re paying attention to the story, you’d want to start with the previous album, but to be honest, a person unfamiliar with the events portrayed wouldn’t be able to discern a coherent plot from listening to either album. One could argue that Moorcock’s plots in the books aren’t exactly “coherent” either, but that’s by design and is the work of a skilled writer operating within a vast and confusing multiverse of his own creation. Be that as it may, many fans of the extended Hawkwind multiverse will likely enjoy this album.