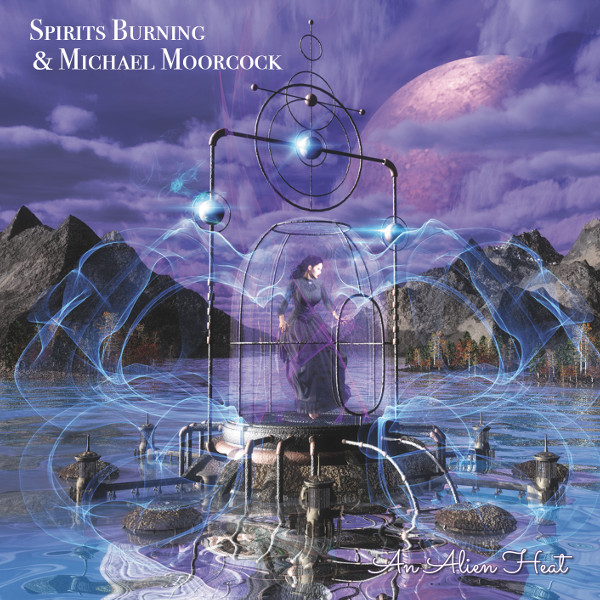 As usual for Spirits Burning albums, An Alien Heat features a large cast of musicians organized by Don Falcone. We’ve got Buck Dharma, Richie Castellano, Joe Bouchard, and Albert Bouchard from Blue Öyster Cult; Jonathan Segel from Camper Van Beethoven; Lux Vibratus from Chrome; Adrian Shaw from Hawkwind and The Bevis Frond; Mick Slattery, Bridget Wishart, and Harvey Bainbridge from Hawkwind; Ken Pustelnik of The Groundhogs; Don Fleming of Half Japanese; Craig Fry of Cartoon; Andy Dalby of Arthur Brown’s Kingdom Come; Cyrille Verdeaux of Clearlight; Dave Willey of Thinking Plague and Hamster Theatre; Steve York of East of Eden and Manfred Mann’s Chapter Three; Paul Sears of The Muffins; and a number of other players. Plus famed science fiction and fantasy writer Michael Moorcock, who contributes most of the lyrics as well as vocals and harmonica. So, now that I’ve presented a bunch of information that can be found on Discogs.com, what about the music? The honest truth is that it just doesn’t work for me. I’m a fan of many of the participants, and I’ve enjoyed quite a few of Moorcock’s books, but altogether this just seems like a mess with many of the trappings of a top-notch production. Many of the lyrics just don’t flow well when sung and are too stiff to sound natural, coming off like poetry that was written without being intended for use with music — and the vocalists struggle to deal with the awkward phrases. I almost feel guilty for not liking it, but every time I listen, my thoughts turn to the criticisms that progressive rock started getting in the latter part of the 70s: too self-consciously arty and pretentious to have any real passion or emotional impact. As a bonus, the album comes with a second CD featuring instrumental versions of all the songs, almost as if someone knew the lyrics would be a turn-off for some listeners. It turns out the vocals weren’t the only problem on the main CD. In some ways, this whole album just makes me sad. Sad that so much talent put so much effort into something that just isn’t very good. Maybe I’m just in a grumpy mood, but I’m going to move on now. Check out An Alien Heat if you’re a fan of anyone involved, maybe it will work better for you than it did for me.