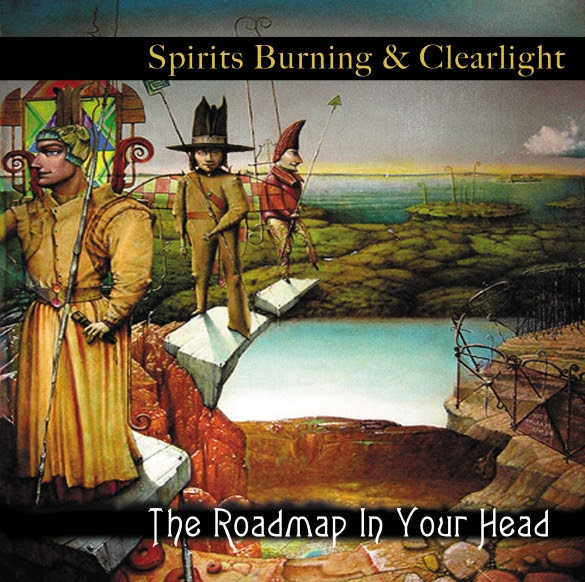 This is the second collaboration between Spirits Burning master of ceremonies and multi-instrumentalist Don Falcone, and Clearlight – or more precisely Cyrill Verdeaux, who is the mastermind behind Clearlight. Although several of the 35 musicians here have played with both Facone and Verdeaux on previous projects, as well as many previous Spirits Burning releases (there are over a dozen releases now), the amazing and unsung glue that makes this kind of worldwide collaboration even possible is software tools like Cakewalk, Cubase, ProTools, and the like that are readily available today but would have made a collaboration of this scope nearly impossible twenty years ago. As previously mentioned, there are 35 musicians and singers here, playing just about every instrument imaginable, but only 14 tracks; members of various incarnations of Hawkwind and Gong are here among many others who participate, including the late Daevid Allen, who wrote the lyrics and sang on the closing track “Roadmaps (The Other Way).” Two other cuts “Sun Sculptor & The Electrobilities” and “Isolation in 10 80” feature lyrics and vocals by Bridget Wishart, but other than those three this is pretty much an instrumental album. As a collection of diverse ideas, it’s excellent throughout, but a very difficult one to describe as a whole, as each track features different writers and different musicians. It doesn’t really sound like an album by a group or solo artist with a single vision, but instead a collection of tracks by different musicians with different ideas working together in smaller units. Each of the 14 cuts emerges with a different guiding idea, though with Falcone at the helm guiding the process, the overall concept works well, as it has on all previous Spirits Burning releases, but a little better each time – continuous improvement. All taken, this is a very unique way of producing music that involves a lot of creative input from a wide group of musicians from all around the planet, all of whom are of Falcone’s choosing. That’s the roadmap, and it works for me.