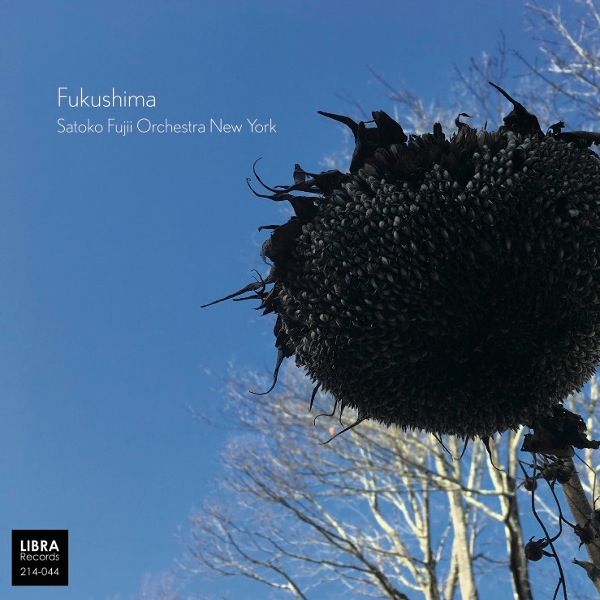 For her musical meditation on the events that happened in the Fukushima area of Japan in 2011 — the Tōhoku earthquake, subsequent tsunami, and most prominently the nuclear accident at the Fukushima Daiichi Plant — bandleader Satoko Fujii has enlisted the New York edition of her Orchestra to perform a five-part suite. Included in the 13-member ensemble are a number of players of note, with Nels Cline (guitar), Curtis Hasselbring (trombone), and Natsuki Tamura (trumpet) being ones we’ve covered individually here at Exposé. It is notable that Fujii herself doesn’t play on this set, which doesn’t include piano at all. Of the five sections, the middle three comprise the bulk of the material, each near or beyond the 15 minute mark. For the most part, they consist of composed sections interspersed among long improvisations for one or two musicians at a time, some of which are quiet enough to make you think your player may have frozen up. During the middle section of part 4, Cline gets to mess around with some crazy backwards looping effects on his guitar for a couple of minutes, but for the most part, the guitar is quite understated in the arrangements. Most of the solo spots involve non-standard playing techniques rather than conventional sounds, and quite frankly, it’s the kind of thing that might have been enjoyable for audience members at the live performance, but often descends into tediousness for a listener in other situations. I’m not categorically averse to free improvisation, even with a relatively large group — the group blow that leads out of the middle of part 4 and into the composed ending, for example, is a lot of fun. I can’t help comparing Fukushima to the Heliosonic Tone-tette recording I reviewed just a few days ago. In some ways they may be apples and oranges, but as two examples of 10+ member groups improvising, the Sun Ra homage is entertaining, which is not a word I would use much with this album. Admittedly, the subject matter is bound to skew dark given the theme, but I know which I’d rather revisit. Don’t get me wrong, Satoko Fujii has recorded a lot of music I really like, and I can say that about more than half of this album (including a few parts that are downright glorious), but the other parts are overly indulgent for my taste. I almost feel like an insensitive heel for criticizing music that was made with such sincerity on such a serious theme, but there it is: I've given my honest opinion, and it is decidedly mixed.