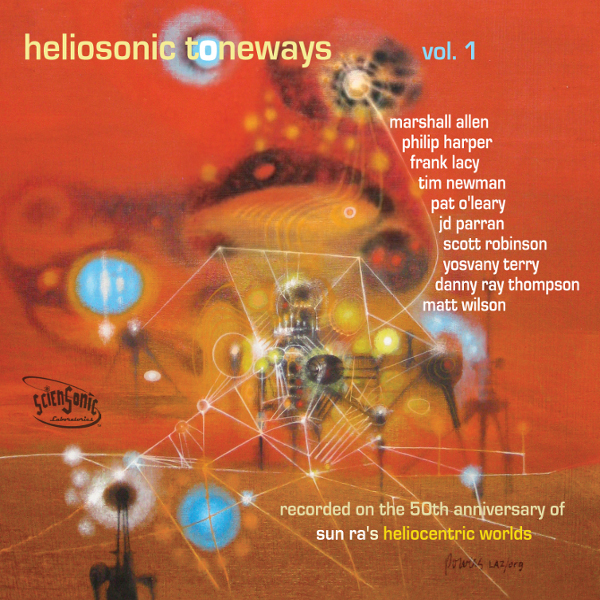 From the name of this ensemble, you might guess that there’s some kind of connection with Sun Ra, and you would be absolutely correct. The impetus for the group’s formation was the 50th anniversary of the recording of The Heliocentric Worlds of Sun Ra, an album that has come to be regarded as a watershed moment in jazz (at least by some). Sun Ra was developing a new way of composing and organizing large ensemble music, blending his instructions with the players’ own improvisations. Of this current group, Marshall Allen was there for the original, playing alto sax, piccolo, and percussion. Danny Ray Thompson joined the Arkestra a few years later, playing bassoon, saxophones, and flute on dozens of albums. The others may not be actual Arkestra members, but are definitely kindred spirits: Scott Robinson (various instruments), Frank Lacy (trombone), Philip Harper (trumpet), Pat O'Leary (bass), Yosvany Terry (saxophone), Tim Newman (bass trombone), Matt Wilson (drums), and JD Parran (bass clarinet). One factor that is touted prominently in the publicity for this release is the fact that this album prominently features a bass marimba, and not just any bass marimba, but the same actual instrument that was played in the Heliocentric Worlds sessions. Sun Ra played it in ‘65, and Marshall Allen plays it here. They also recorded this album with engineer Richard Alderson, who handled the knobs for the original sessions. On to the music… This set is very much in the same spirit as its inspiration, with a similar sized ensemble applying the same principles, with lots of improvisation and close attention to the unusual tone colors possible with the instrumentation. At times, it’s like a spaced-out take on New Orleans jazz, where the individual instruments are all embellishing known lines; at other times it wanders off into free-form sparseness. It’s as if the listener is drifting in space, with objects tumbling past the window: there goes an asteroid that sounds like a bass clarinet; that comet sounds like a swooping synthesizer; and what was that thing that sounded like a prepared piano? This is fascinating music that is reminiscent of Sun Ra’s eccentric ideas without copying the pieces — after all, it was the process of making the music that made it so innovative. An added bonus is that while much of Sun Ra’s music was recorded under less than ideal technical circumstances, Heliosonic Toneways, Vol. 1 sounds amazing, with each instrument vividly present in the mix and manifestly alive in impact. In addition, it’s just plain fun to listen to. Looking forward to Vol. 2.