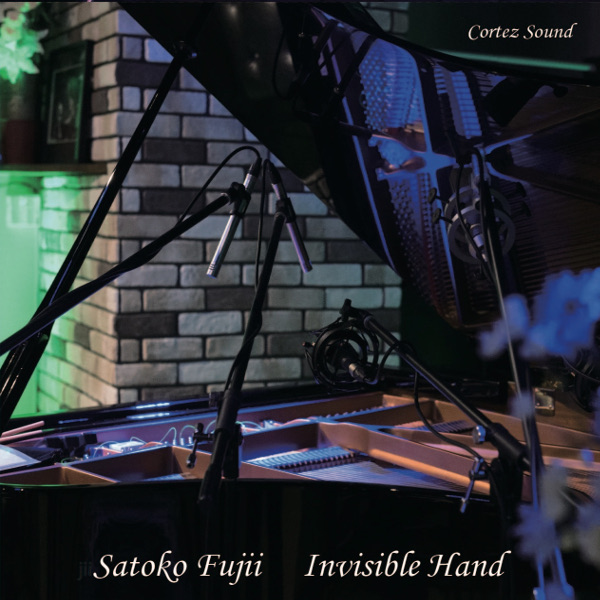 Among the instruments common in jazz music, the piano occupies a special place as a foundational part of most ensembles. And given the instrument’s wide range of possible sounds, there is a huge variety style possible, from Thelonious Monk’s jumpy minimalism to Fats Waller’s rollicking blues to Oscar Peterson’s flamboyant invention to Bill Evans’ moody expressionism. Every jazz pianist of note has produced a body of solo work in addition to any group efforts, and Satoko Fujii is no exception. The last purely solo release I heard from her was Sketches in 2004. That was a studio recording, but Invisible Hand finds her in a live setting, captured April 28, 2016 at the Cortez club in the Japanese city of Mito. As to what school of jazz piano Fujii belongs to, the answer is “all of the above” — and also “none of the above.” In addition to various jazz idioms, she incorporates preparations, altering the instrument’s sound in ways that are quite unusual, not just the gong-like tones and percussive noises usually associated with prepared piano. From sparse Debussy-like meditations to frenetic cascades of notes to synthesizer-like sonorities achieved by reaching inside the piano, just about anything can happen. You’ll hear what might be called “abstract boogie-woogie,” vast clusters of notes that rumble in the lower register, melodic fragments broken up all over the keyboard, unpredictable rhythmic motifs, and more. The ten tracks range from one under five minutes to three topping the ten-minute mark, for roughly and hour and a half, and much of it was freely improvised. Fujii does hit on a few pieces from her previously recorded albums, including the reverential title track from her Gen Himmel album. Two of my favorites are among this album’s shorter selections. “Hayase” is a spirited romp based on the rhythmic repetition of a single note, with dizzying flurries and all sorts of craziness going on around it. “Green Cab” starts with some inside-the-piano playing, with metallic harp-like glissandos and some odd percussive sounds, then a tentative bass line comes in, unsure of a key, and then chordal jabs, fast runs, and bouncy melodic fragments appear, creating a warped stride workout that must have been a kick to watch her play live. Two full CDs of solo piano may be more than you want at a single go, but Fujii’s artistry is worthy in any size serving, and a free-spirited addition to the world of jazz keyboard.

The Miracle Lucky Girls of Afrirampo