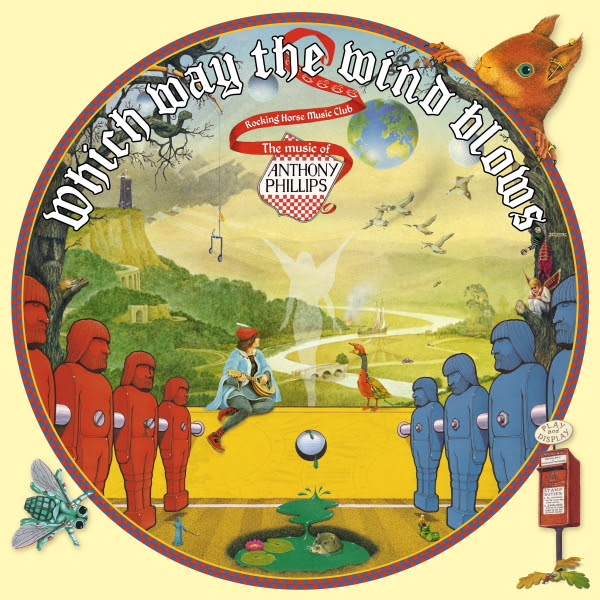 In the roughly fifteen hundred years since Anthony Phillips left Genesis, he’s released a few hundred albums, mostly containing instrumental music, especially acoustic guitar pieces. I’m exaggerating a bit — it’s been 50 years, and he’s put out well over 40 albums. But among those dozens of instrumental albums, there have been a few where he showed his talents as a fine songwriter and a capable singer. His first solo album, The Geese and the Ghost (1977), featured a few vocal tracks; Wise after the Event (1978) and Sides (1979) were mostly vocal tunes; and he formed The Anthony Phillips Band for Invisible Men (1983) with the express purpose of producing music more oriented towards pop songs. The Rocking Horse Music Club is a New Hampshire collective of musicians based at Rocking Horse Studios, and Which Way the Wind Blows is their tribute to Phillips’ song-based material. They’ve selected ten tracks (including two instrumentals) from the albums I mentioned and lovingly produced new versions that stick quite closely to the originals. Without side-by-side comparisons, the main notable difference is that the vocals are more precise and studied than Phillips’ own — he’s got a distinctive, unstudied quality to his voice that’s lacking in these more “professional” sounding takes. With closer comparison, the only other difference is the more modern production style, which is louder and somewhat less dynamic (though honestly not objectionable in this case). For “Collections” (from The Geese and the Ghost) they’ve chosen to arrange it with drums as more of a rock ballad than the delicate acoustic original. They finish off with a muscular take on “Nightmare” (from Sides), showing that it would have made a fine Genesis track. For those who know Anthony Phillips as a purveyor of gentle acoustic guitar music, Which Way the Wind Blows is a peek into the composer’s other side, and while it doesn’t add anything to the originals, it’s a welcome spotlight shown onto an impressive body of work.