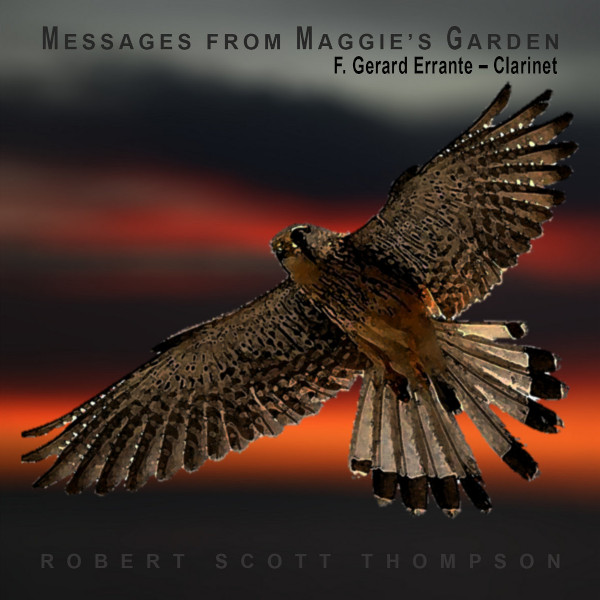 With Messages from Maggie’s Garden, composer Robert Scott Thompson presents three electro-acoustic compositions for clarinet and electronics, with the clarinet part played by F. Gerard Errante and the composer himself doing the processing and whatever else is there. The pieces date from 1996 to 2010 and were commissioned by Errante. The mood is meditative and mostly quite serene, though some of the electronic sounds, taken individually, have an ominous edge to them. Errante’s clarinet provides mostly conventional playing, though there are some glissandos and several times when his parts seem inspired by bird songs. The electronics are occasionally recognizable as processed versions of the clarinet parts, but more often consist of ambient drones, fiddly skritching sounds, or even heavily modified voices. On “Canto (de los Sombras)” there are some percussive sounds like the striking of a large drum combined with something else. “Widening Gyre” features a sound a bit like a piano string being struck by a hard object, but who knows what it really is. “Passage” is very evocative of slow progress through changes, with drones that constantly shift color as the clarinet explores slow melodies. As a fourth track, Thompson takes the materials of the three original pieces and assembles them into a longer work that is an abstract ambient epic. The clarinet is mostly undetectable in the sparse soundscape, but it’s a fascinating series of textures, lacking melodies, rhythms, or harmonies, but quite enjoyable as a soundtrack to an inner journey.