With the festival only a month away, the finishing details of the long-running ProgDay festival are taking form. Belgian space rock explorers Quantum Fantay, multinational fusioneers Marbin, and the trio of Pascal Gutman, Ramsés Luna, and Kiko King. 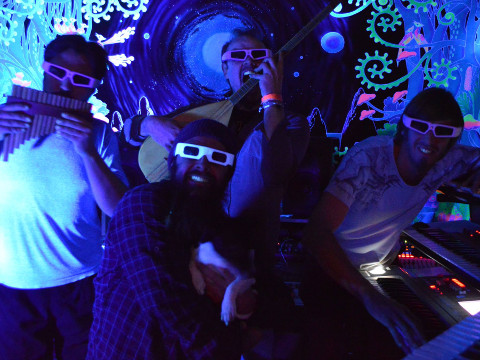 QUANTUM FANTAY:
“A race around the world, a detour to the ancient East and a trip to deep outer space pretty much sums up spacerockers Quantum Fantay's approach perfectly! The band take ideas and themes similar to bands such as the Ozric Tentacles, Hidria Spacefolk and even a dash of Hawkwind, but add plenty of their own individuality…”
- Aussie-Byrd-Brother, PROGARCHIVES

The base of Belgium’s QUANTUM FANTAY was founded in 2002 when neighbors Pete Mush and Jaro began jamming in the attic, later joined by Gino Bartolini. Since then the band has released 7 albums and has become known as one of the best space rock bands in the world. US audiences were first introduced to the band’s live energy at NEARfest 2009. ProgDay is pleased to give QUANTUM FANTAY’s US fans another chance to hear them as our closing band on Sunday.

MARBIN:
MARBIN began in 2007 as an improvised music duo consisting of Israeli guitarist Dani Rabin and Israeli saxophonist Danny Markovitch Slor. After relocating to Chicago in 2008, the pair began working with Chicago musicians and developed a reputation for their playing and live energy. With a do-it-yourself approach, MARBIN started massive touring in 2011 to take its music everywhere it could, playing over 300 shows a year. After well over a thousand shows and numerous album releases, the band has established a fan base among fusion fans all over the US. MARBIN will be featuring material from the new album to be released in late September.

PASCAL GUTMAN: Starting with piano and later moving to the bass guitar, Pascal discovered the Chapman Stick in 1981. Though playing bass for 20 years, Pascal began to compose and play exclusively on the Stick. Since then he has become known as one of the main proponents of the instrument in France and has released 4 recordings in various configurations, from solo performances to quintets. This trio is the most recent incarnation of Pascal's music.

RAMSÉS LUNA: ProgDay audiences may remember Ramsés Luna from his previous ProgDay performance as a member of CABEZAS DE CERA. He is also a founding member of LUZ DE RIADA and is part of the collective ESPACIAL MEXICANO.

KIKO KING: Kiko King is no stranger to ProgDay, having previously performed on the Storybook stage during his 5 year stint as the drummer of CAST. A Sabian endorsed artist since 2003, he released the album Stick Drum Duo with Pascal Gutman in 2012.

Tickets are on sale, see the link below.

The Residents - Demons Dance Alone – The last studio album from the Residents was Wormwood, back in 1998. In my review of that album (in #17) I remarked that parts of it were relatively accessible, at least from a Residents standpoint....  (2002) » Read more

Eroc - Eroc 4 – Revisited Records has now released the fourth Eroc solo album, recorded in 1982. For those of you who don’t know, Eroc is the pseudonym of Joachim Heinz Ehrig who was Grobschnitt’s drummer turned...  (2008) » Read more

Chandeen - Teenage Poetry – The Projekt label has been searching beyond US shores for new groups to host on their label, one example being Chandeen from Germany. This trio was formed around keyboard player / programmer Harald...  (2008) » Read more

Kenso - Sparta Naked – Fans of Kenso will certainly be familiar with the band’s album Sparta from 1989, a bold step in a more jazz-rock / fusion direction following their first three studio and double-live albums,...  (2010) » Read more