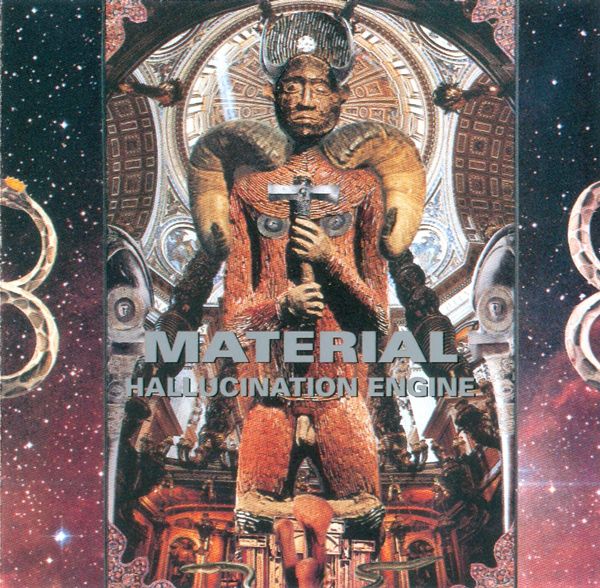 Bill Laswell has been the driving force of Material for about ten years now. Heavily involved in the NYC scene, Laswell has become a highly respected producer; on Hallucination Engine, beats and breaks abound and the production is seamless, but Laswell breaks no new ground. This is disappointing too, considering the vast number of world class musicians on the album. Unfortunately, the music takes no real chances, and the synth parts are relegated to sparse arpeggios and textures. Keyboard players should find this a dismal listening experience, not one synth solo! There are some engaging moments however, supplied most notably by Wayne Shorter's saxophones, Laswell's intense bass, and the violin of Shankar. On the first track, "Black Light," Shorter blows the melody line with the authority and grace that endeared him to so many Weather Report fans, while the percussion percolates over Laswell's bass lines. The breaks are tight, with Shorter supplying some classic modal solos. The end result is a highly accessible (a.ka. danceable) crossover of jazz and hip-hop, dub, and world music. Shankar’s provocative violin melodies conjure up visions of exotic Indian landscapes, especially an the last track "Shadows of Paradise." Laswell, Shankar, and Nicky Skopelitis shine on this track. Shankar's eastern scales contrast Skopelitis' West African tinged guitar melodies, while Laswell grooves mightily, allowing for some inspired jamming by all three. Tracks two through seven are fairly generic Laswell dubs which totally groove, and each tune has redeeming moments when guest musicians interject their ethnic elements into the mix. Laswell cops some 70s bass lines (personal favorites ?) from Billy Cobham's "Red Baron" on "Words of Advice." Weather Report's "Cucumber Slumber" is sampled and rearranged, yet oddly enough Wayne Shorter does not play on this tune. This kind of assemblage lacks the urgency, iconoclasm, and spontaneity of the previous Material and Golden Palominos music, however if you want to study polished audio production techniques, definitely check out Hallucination Engine. If you are a diehard progressive snob, avoid this one. If you don't own any Material, but want to check it out, start with Memory Serves.