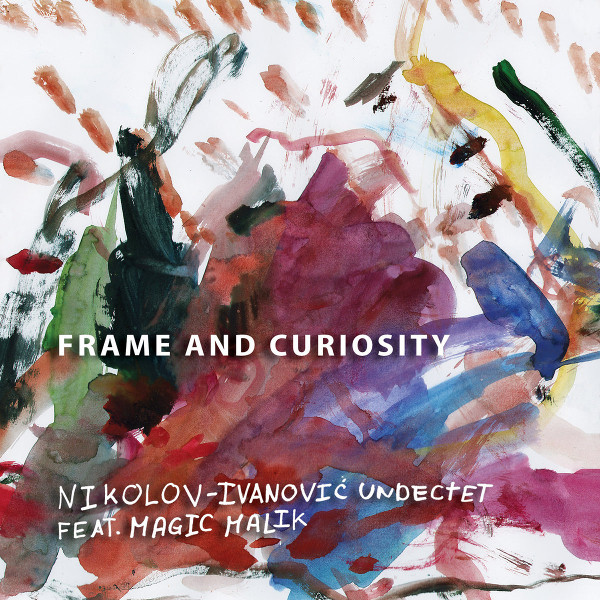 With their Undectet, Vladimir Nikolov and Srđan Ivanović have hit upon a powerful example of the large jazz ensemble. Frame and Curiosity is the group’s second album, and it shows a talented bunch of musicians playing creative and colorful music that fits broadly in the jazz tent. It’s not quite a traditional “big band,” as the brass complement consists of one each of trumpet, trombone, french horn, and tuba rather than four each of trumpets and trombones; the woodwind section features three players who double up on saxes, flutes, and clarinets, along with special guest “Magic” Malik Mezzadri on flute and vocals; the rhythm section is made up of drums (Ivanović), bass, keyboards (Nikolov), accordion, and occasional acoustic guitar (Nikolov again). Nikolov is the composer and arranger, and these eleven tunes touch on a variety of flavors, from swinging post-bop to latin and rock-tinged rhythms. The arrangements avoid chaos and dissonance, presenting easy grooves and lovely melodies that won’t offend but manage to avoid sounding too smooth. There are some nice touches where a modern chamber music influence can be heard, and the frequent use of flute and clarinet, along with the tuba and accordion, gives the music a distinctive sound that’s not quite like any other band I’ve heard. All of the soloists acquit themselves well, and Magic Malik’s flute vocalizing is a similar technique to that made famous by Ian Anderson, though his playing sounds very little like anything you’d hear in Jethro Tull, and his voice reminds me a bit of Airto Moreira. His use of echo is one of the few electronic touches on the album. Frame and Curiosity is a great entry into the modern canon of large ensemble jazz recordings, and quite a nice listen.