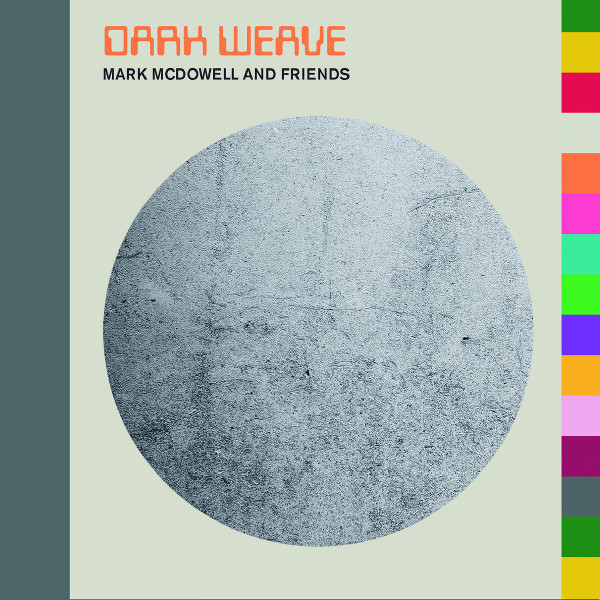 Mark McDowell is a UK musician who has been intermittently releasing music since 2001. We in fact reviewed his Rooks Wedding 15 years ago. Since then he joined the Fruits de Mer stable of artists with two different songs “Girls of Belvoir” that appeared on the Regal Crabomophone 2014 Annual and the recent Goldfish compilation and “Service of Owls” on the 2017 VA compilation The Fifteenth Dream of Dr. Sardonicus. Now Mark and his friends are self-releasing his new LP, Dark Weave, on green vinyl, with the support of Fruits de Mer records through a catalog number on their Friends of the Fish sub-label. Mark (vocals, guitar, keyboards, and percussion) and his friends Jim Dyke (bass), David Gould (bouzouki, dilruba stick, and dulcimer), Pete Westaway (synths), John Hymas (strings), and Hannah Moriah (vocals) have produced a set of nine acid folk / psych rock tunes that they developed at weekly get-togethers. They recorded Dark Weave in Bristol, England, San Francisco, and Presteigne, Wales. The result is a mixture of singer-songwriter acid folk tunes with a bit of hypnotic drone-based improvisations. The title track opens the album and is different from the rest as it conveys more of a mood than a melody through the slow interweaving of synths and acoustic guitar. “The Service of Owls” from last year’s compilation is a wonderful acid folk tune featuring both acoustic and electric guitars. “Look into the Dust” is an upbeat fuzzed-out psych guitar romp. The beautiful harmonies of “Walking Back to You” along with the introduction of John’s strings greatly enhances this trippy acid folk song. “Celequiem” is a delicate acoustic acid folk song with chirping birds and whispered voices. The high point of the album is the slow trippy pseudo-Indian drone song “Light of Love.” “Forgiven” is a trippy pop-psych song followed by “Elizabeth,” a folky love song on both electric and acoustic guitars plus synth. The album closes with “Message Sent,” another singer songwriter pop psych song. Overall I find that there is a bit of resemblance to Cardiff’s Soft Hearted Scientists and Nathan Hall. If interested, you can order the album directly from Mark through his Bandcamp site.